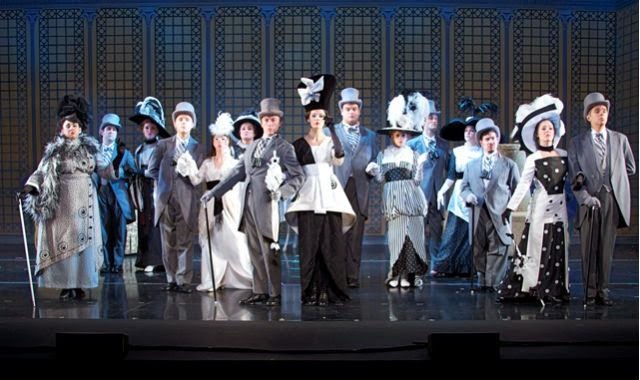 I may have last seen the 1964 movie “My Fair Lady” 20 years ago, but the image of the beautiful Audrey Hepburn dressed in white and black wearing a giant hat, remains firmly etched in my mind. So powerful was her performance as Eliza Doolittle, the common flower seller turned genteel lady, that most associate the role with either her or Julie Andrews who played Eliza in the hit musical on Broadway in 1956 and dubbed for Hepburn’s singing in the movie.

Between Hepburn and Andrews, Aurora Florence has pretty big shoes to fill when performing the iconic role in the celebrated musical now showing at the Marina Bay Sands. By and large, she does justice to the part though her voice lacks sufficient power in the high range in show stoppers like “I Could Have Danced All Night.”

Florence’s acting as the feisty cockney who is finally transformed into a lady with the help of phonetics professor Henry Higgins (performed by Chris Carsten) is enjoyable and she charms the audience into cheering Eliza’s progresses.

Based on George Bernard Shaw’s 1912 play “Pygmalion,” the musical features the book and lyrics by Alan Lerner, and music by Frederick Lowe. And though it may have once been labeled the “perfect musical,” the storyline is now showing its age and lacking subtlety with some of the cast — almost all of the ensemble — running dangerously close to clichéd caricatures. It will continue to be saved though by popular classics like “Wouldn’t it Be Loverly” and the rousing “Get Me to the Church on Time,” that make it a very enjoyable evening.