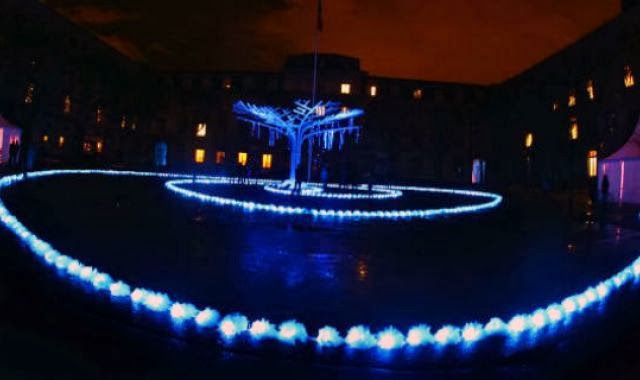 Giant glowing dandelions, interactive bulb clouds, raining lights, and glowing graffiti will be amongst some of the artworks on display at the biennale i Light Marina Bay festival set to return March 7 to 30.

About 25 large-scale artworks by artists from around the globe will be installed around the Marina Bay promenade and many will be interactive, such as Floating Hearts by Travesia de Luz that invites people to play with illuminated hearts on a wall, or JouJou-Ours by Uno Lai which encourages people to hug teddy bears to create a magical kaleidoscope of color. The Pool by Jen Lewin Studio is a giant interactive field of circular pads best enjoyed when a group of people work together to splash in the puddles of light, while Clouds by Catlind r.c. Brown & Wayne Garrett will invite visitor to pull cords that turn on and off energy-efficient bulbs configured in a giant cloud shape above their heads.

Amongst some of the more whimsical works are Giant Dandelions by Olivia d’Aboville, a forest of 90 larger-than-life light flowers and Janet Echelman’s 1.26 Singapore, a giant sculpted fish net with colored lighting transforming it into a luminous shape seemingly flowing in the sky.

The three-week festival goes hand in hand with an energy-saving campaign in the central business district, known more for keeping lights on at all times of the day. Two years ago, 30 stakeholders had agreed to take place in the “Switch Off, Turn Up” campaign that encourages property occupiers and managers to switch off non-essential lighting and turn up air conditioning temperature controls during office hours, and organizers are confident the take up rate will be similar this year. Jason Chen, director for Place Management, Urban Redevelopment Authority (URA), pointed out that the energy savings from the campaign (estimated at 200,000 kilowatts) far exceeds the energy used to run the light installation festival (7,000 kilowatts).

Co-curator, Ong Swee Hong, of the architectural firm Ong & Ong says all the works were chosen for their use of sustainable materials and energy-efficient lighting. D’Aboville’s Dandelions uses discarded plastic bottles to create her flowers.


As first published on BlouinArtinfo.com
Singapore

Peggy Guggenheim was no ordinary art collector. In her lifetime, she acquired a treasure trove of Cubist and Surrealist artworks at bargain price right before the onset of the Second World War; she ran art galleries in London and New York championing then-little known artists such as Jackson Pollock and Robert Motherwell; and she also played a significant role in positioning Venice as a contemporary art city after she moved there permanently in 1948.
After her death in 1978, her Venetian home, the 18th-century Palazzo Venier dei Leoni, was transformed into a permanent exhibition space housing the Peggy Guggenheim Collection. It is now the second most visited museum in the city after the Dodge’s Palace with over 427,000 visitors a year.
But while her collection is primarily renowned for its Cubist, Surrealist and Abstract Expressionist masterpieces, the new exhibition “Peggy Guggenheim: The Last Dogaressa” – running until January 27, 2020 - is aiming to showcase how wide her collecting e…