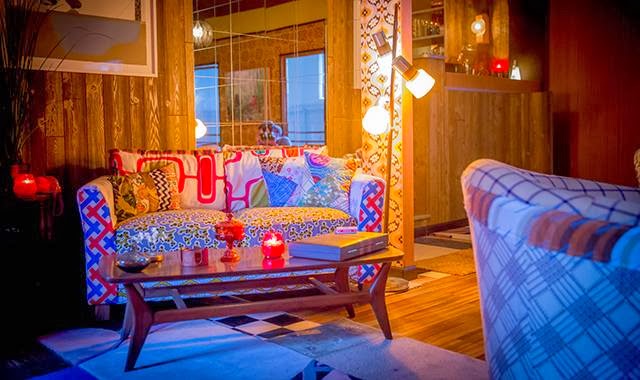 The installation was commissioned by Absolut Art Bureau, an entity set up in 2012 to handle the art activities of the Absolut Company, maker of Absolut Vodka. “With  the artist bar, we give full carte blanche to the artist to develop this bar experience as a total art work,” explains Vadim Grigorian, global project leader for Absolut Art Bureau and marketing director of creativity and luxury at Pernod Ricard, Absolut’s parent company. “We’re not trying to impose anything on the artists. We try to find artists who are already interested in the topic, and these new works are an extension of their practice.”

For Art Basel’s inaugural Hong Kong edition, in May, Adrian Wong’s Wun Dun installation, located in a room beneath the Fringe Club in Hong Kong’s Central district, featured shaggy animatronic monsters playing Hong Kong pop tunes from the 1950s and offered a range of drinks, such as a monkey-picked-oolong martini and the “duck vodka” cocktail with a duck-fat wash and a sprig of bok choy, all designed by the artist. Wong found inspiration in the city’s multilayered past, as well as in one of his favorite restaurants, Tai Ping Koon, and added subtle references in the space to many of the things he felt captured the essence of Hong Kong.

Wong, who admits being surprised by the amount of freedom he was given, says the greatest strength of Absolut’s art bar series is its affinity with contemporary art’s shift toward social practices. “As a brand that cultivates social experiences, the collaboration makes sense and feels natural, allowing both parties to productively join forces,” says Wong. “Absolut Art Bureau is also unique in that  it supports artists’ practices that are far less material than those typically embraced by other luxury brands, encouraging experiences over objects.”

Grigorian believes that in a world where art is increasingly used in marketing, it is important for a brand to stay true to its own image and support activities in line with its corporate DNA. “That’s where many brands make a mistake, because they try to seduce the art world but forget who they are. That’s why we do the artist bar. We don’t do the artist sculpture;  we do something that definitely links to who we are. We’re a vodka brand, and we’re very proud of it. Our brand is about creating social tissues, connectivity. That’s why we see the bar not as a drinking place, but as a place of meeting.”

Grigorian points out that Absolut Vodka’s early branding success was born from a collaboration with a well-known artist. Back in the 1980s, the Swedish vodka was new and little known. The company commissioned Andy Warhol to do a painting that featured its bottle, and the resulting work formed Absolut’s first big advertising campaign in 1986. The commission became the first of many as Warhol introduced the brand to his friend Keith Haring, who then introduced it  to Kenny Scharf. Between 1986 and 2004 Absolut Vodka commissioned some of the biggest artists of the 20th century like Damien Hirst, Louise Bourgeois, Nam June Paik, and Maurizio Cattelan to create about  850 artworks, which are now entrusted to the Spritmuseum in Stockholm. “The only constraint was that the artists had to feature a bottle preeminently in their works—I like to joke that we probably commissioned more than the Medici,” Grigorian says, adding that today the brand does fewer such collaborations. “We set the trend for that, but nowadays everybody is doing it, so we want to do something different.” In 2011 the company launched the “Absolut Blank” series, a new chapter in its efforts to reach out to artists, inviting 20 of them to fill large, white canvases shaped like the iconic vodka bottle.

Absolut Art Bureau keeps itself busy. On top of commissioning the bar installations, the bureau also supports the public programs of major art events. “We believe public discourse is very much part of the art and is needed in the art world,” Grigorian says. “But we don’t try to be superficial in our support by just putting our logo on these events. We try to bring something to life that wouldn’t exist otherwise and amplify something already existing.”

The bureau sponsored the public programs at Documenta 13, as well as the fair’s Maybe Center for Conviviality, where “during 100 days, artists, museum directors, curators, philosophers, or even nuclear physicists shared with the public their points of view about art and life,” says Grigorian. “For Art Basel Conversations we send our dedicated film crews, who capture the talks with several cameras, and then we edit them.”

The bureau also presents the Absolut Art Award, which this year recognized not only Brazilian artist Renata Lucas but also the New York–based art writer Coco Fusco.  Both winners received a cash prize of €20,000. Lucas also received up to €100,000 to develop and produce a new artwork, while Fusco received an additional €25,000 for the publication and distribution of a new book in collaboration with a leading publishing house. Grigorian said that it was particularly important for Absolut Art Bureau to set up an art writing category, as the move is in line with Absolut’s encouragement of critical discourse. “Clearly this is a noncommercial project, because in no way can we build our commercial brand with this. But this is really to build a rapport with the art community.”