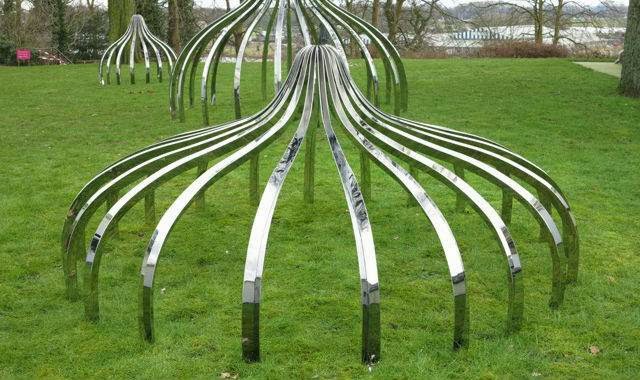 For more than two decades, Thai artist Pinaree Sanpitak has been exploring the form she calls the “breast stupa” in various media, playfully reinventing the shape that plays on both the female body and the sacred Buddhist architectural form. The sensual shape has appeared on canvas, in food art, as well as giant installations of inviting pink breast cushions that visitors can plunge into.

Her latest solo show, due to open at Yavuz Fine Art in Singapore on January 18, will present for the first time in a gallery context her Breast Stupas Topiary, a series of eight stainless steel sculptures first exhibited outdoors at the Museum voor Moderne Kunst Arnhem, The Netherlands.

As they crawl through the sculptures' legs and catch a glimpse of their own reflections, curious visitors will be able to engage with the trellis-like objects that invite a perambulatory viewing and intimate inspection.

To create a conversation with the sculptures, Sanpitak will present a series of five new large-scale paintings of floating ovoid forms based on the shapes of seeds, as well as a series of wall-mounted stainless steel shelves designed by Tokyo-based French designer Philippe Stouvenot with recesses inspired by Sanpitak’s Breast Stupa shapes.