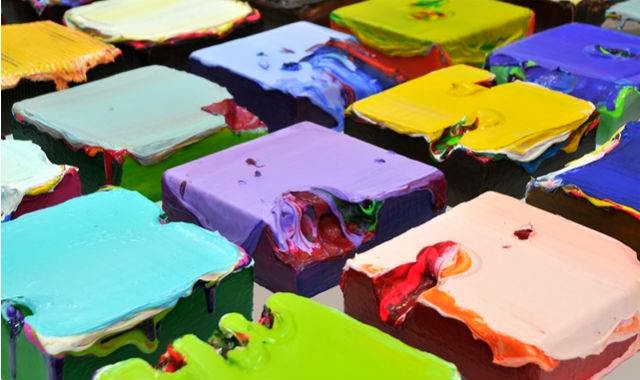 It’s been over four years since the Singaporean artist held her last solo show, but during that period Jane Lee has kept herself busy, taking her work in a new stylistic direction.

Come January, the painter known for highly texturized works is scheduled to have a solo exhibition at Sundaram Tagore Gallery at Gillman Barracks, titled “100 Faces,” while also presenting a 10-meter-long installation at Art Stage Singapore 2014.

Lee has been exploring the various processes and materials of painting in her work, experimenting with techniques and tools — including kitchen utensils and syringes — to make her viewers rethink what qualifies as a painting. Is it the canvas, the paint itself? She has squirted paint on her canvases lavishly, building layer upon layer as if creating fabrics, making the paint so thick that it could be self-supporting in some cases. As she experimented with new tools, she completely abandoned the use of paint brushes a few years ago, and sometimes only uses her hands. “Creating paintings using my hands without relying on other tools is fun. It is easier to be in control and it also allows spontaneous interaction with the paint texture. It has this very naked feeling and it is able to create interesting yet unexpected markings on the canvas,” she explained in an interview.

Back in 2009, Lee started rethinking her practice, trying to incorporate Chinese ink painting principles, in particular the use of empty space as a focal point to create “the essence of what the painting attempts to represent.”

“Previously, much of my exploration with painting had been focused on experimentation with various techniques of creating paintings through building layer upon layer on a canvas. It occurred to me at some point that this obsessive layering of materials onto the canvas was very much influenced by Western practices. This is when I started to bring in my experiences with Zen philosophy, where the teaching emphasizes 'less is more,'” she said.

“So I started experimenting. This new body of painting is concerned with subtracting paint from the canvas rather than adding onto the surfaces. Part of the reason was that I was interested in the subtractive process of creating a painting. Through working on these pieces, I thought of the different faces that I encountered during one of my spiritual workshops about encountering past lives. These ideas gave birth to my upcoming exhibition titled 100 Faces” she recalled.

In her new Portrait series, comprising eight abstract paintings, smooth surfaces have been scraped, poked at, and bored into to reveal swaths of colors hidden below the surface. “The surfaces for some of the pieces have been created while the painting layers were still wet. These colors disturb the otherwise smooth white surfaces of the canvas — they are traces left behind,” the artist said.

In the Stack series, Lee created a pile of small canvases each covered with multiple thick layers of paint, as if creating a giant sandwich tower with the fillings protruding on all sides and covering all edges.

In the work “100 Faces,” one hundred small-scale paintings are laid out in a mosaic-tile grid. Lee will be presenting a separate work titled “50 Faces,” at Art Stage. “It is an extension of the first one, but conceptually, they are very different.” she said, adding, “The first one intends to challenge the ways in which viewers approach and perceive paintings, while for 50 Faces, I attempted to create a painting portrait and to incorporate viewers' faces into the paintings in order to add an element of interaction to it.”

As first published on BlouinArtinfo.com
Singapore