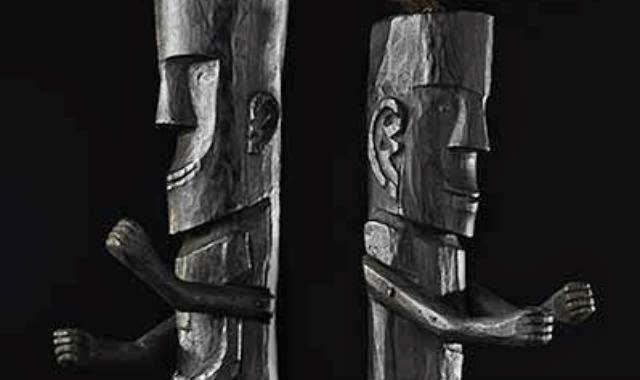 The Batak people began migrating to Northern Sumatra in Indonesia from parts of southern China as far back as 6,000 years ago. With a reputation of being head hunters and sorcerers, which they may have cunningly cultivated to keep strangers away, the Batak were greatly feared by their coastal neighbors.

The Batak culture is now the focus of a new exhibition at the Asian Civilisations Museum, “Beginning of the Becoming,” which presents over 80 sculptures in wood, stone, and bronze.

“Batak religion was a mix of animism and ancestor veneration,” explains show curator David Henkel, “and many of the objects in the show were carved for ritual purposes by specially trained priests known as datu. The priests carved their works to be ritually effective, but the ingenuity and imagination with which they were carved makes it clear that aesthetic values were also important.”

Some of the highlights are a 17th-century sandstone seated male figure — rare in Batak sculpture — as well as a medicine container made from a Chinese porcelain jar and fitted with a specially carved wooden stopper, a carved medicine horn with a riding figure, a stopper with a squatting figure carved with tense, angular features that gives it a stern look, and guardian figures meant to look fierce to ward off evil.


As first published on BlouinArtinfo.com
Singapore