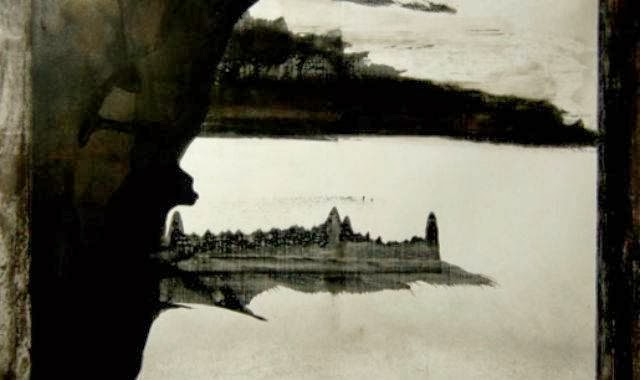 The door opens onto a black and white landscape, where the silhouette vaguely recalls an ancient temple... or is it a mountain? For Gao Xing Jian, the 2000 Nobel Laureate for Literature and a noted contemporary ink painter, it’s all in the eye of the beholder. 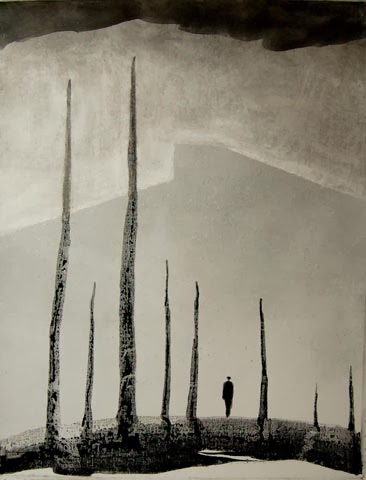 “The advantage of these semi-abstractions is that you can make the viewer travel in his mind. Everybody has their own visual experiences, completely personal. And based on these, these images will evoke something to you that can be different to someone else,” Gao explains in French. “I think we classified abstraction or figuration too easily, but these images cannot be classified like this. It’s like when you dream, you can’t really capture that image. When you wake up, you try to recall it, but it’s only blurred, it’s a suggestion of something,” he says.

Gao explains that images come to him often while listening to music: “The music suggests an emotion and that’s what I paint. But I don’t use music that has a strong melody, like romantic music, I prefer something baroque, a repetitive music that creates a space for the listener’s imagination.”

“Beyond Words — Photography and Ink Paintings by Gao Xing Jian," now on show at iPRECIATION gallery in Singapore, presents a series of 24 black and white photographs the artist took during the making of his 2208 movie, “After the Flood,” along with 25 inks on canvas, mainly dating from 2008-2009.

The “After the Flood” photographic series of giclee prints on matte cotton paper present dancers and actors performing in front of projections of his ink paintings. From a distance some of the monochromatic photographic compositions actually look like Gao’s inks, with the matte cotton paper helping to reinforce this visual illusion. “This work is about hope, the spirit of life,” he says.

Gao likes to illustrate emotions that words cannot adequately describe, even for the laureate. He also favors black-and-white over color, because he believes it helps him create the dream-like vision he seeks to achieve.

He admits he has not been painting much of late as he has been entirely consumed by his third film project, the 120-minute “Requiem for Beauty,” which was premiered Friday, November 8, at the National Museum of Singapore and which the multi-disciplinary artist describes as a “cinematic poem.”

“I’ve worked on this film for three years. It the film of my dreams,” he laughs, saying “there is no story, there is no character, it’s purely a cine-poem with no narration, only successive images, a pictorial montage like a symphonic composition. Just as there are different musical instruments that cross each other on a sheet of music, here you have different images and themes doing the same,” he said.