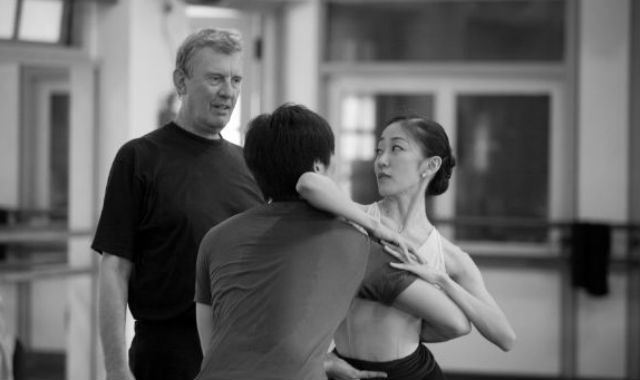 Nils Christe choreographed his first ballet at the Nederlands Dans Theater in 1975 and went on to create 12 ballets for the company before he left in 1982. Since then the Dutch choreographer has worked with over 68 ballet and dance companies, including the Paris Opera Ballet, English National Ballet, Royal Danish Ballet, Royal Swedish Ballet, and the Hong Kong Ballet.

As an independent choreographer, Christe enjoys the freedom of travelling with his wife and long-time collaborator, rehearsal director Annegien Sneep, and they pride themselves on working personally with any company staging his work. “To sell a ballet and not even go there and work with them is something I will never do,” he says. Christe is currently with the Singapore Dance Theatre rehearsing “Organ Concerto,” a ballet choreographed to Francis Poulenc’s music score of the same name, and which he created especially for the Singapore company in July 2012.

What was the inspiration behind this piece?

The music, as always in my work. I tried once to make a ballet in silence and it was a total disaster, because when I don’t hear anything I don’t see any dance. It’s quite unusual to use organ music for dance, in fact I don’t know any other choreography done with such music.

Why do you think that is the case?

The organ is very often associated with religion. Although Poulenc became a Catholic — and I guess that’s what inspired him to write an organ concerto — it’s not really a religious piece of music, and it doesn’t give you a church feel. In the piece there are a lot of sections with the whole cast being on stage and it’s very powerful. But the music also gives a lot of possibilities to make very intimate duets or strong solos. Because it’s for the organ it has a certain flow which is the opposite of piano, which has a more percussive kind of feeling. The organ sound is very broad, rounder. I guess you’ll see this back in the movement. The piece is also very spiritual to me, almost a ritual kind of feeling and at the beginning you see the men, then the women, and then they come together and there is the first touch, it’s like the beginning of a court dance, and then the whole thing starts to develop.

So is there a story line?

No, I think I’ve only made one story ballet and that’s “Pulcinella,” the famous Stravinsky piece. Of course the moment you put a woman and a man on stage and there is eye contact, there is an emotion, and in all my works there is always a red thread that goes through the whole piece that makes sense. Here the binding factor is the music.

How different is this version from the original staging in 2012?

We’re changing a few things but it’s so insignificant, so minute that you wouldn’t even notice. The main difference is that this time we have an original set; and it’s beautiful. The whole set is organ pipes and it’s very impressive, I love it. I wanted something that would support the piece and say something about the music without being decoration, and I think the set designer succeeded very well. It still has an abstract feeling about it.

You’ve now worked several times with the SDT. What do you think is the strength of this dance company?

I find the dancers very inspiring. They are like sponges and everything you say, they take in and the next time you talk to them you see they’ve thought about what you have said to them. It’s not like they leave the studio and work is over, they are the kind of artists who are busy with their profession day and night, and it’s fantastic because you see them grow as individuals and as a whole company. Yesterday, we did a full run for the first time and if I compare it to the first run a year ago, then I’m really proud of what they have done with the material and how they understood the style. That’s a big satisfaction for a choreographer to see.

What would you consider highlights of your career as a choreographer?

One of the highlights was of course to be invited by Rudolf Nureyev at the Paris Opera (in 1985), which produced one of my best ballets “Before Nightfall.” I was really lucky to choreograph this ballet with some of the best dancers in the world, Sylvie Guillem & Manuel Legris, you can’t believe the level of the cast. Another highlight I would say was to have finally had the courage to choreograph a few years ago the Rite of Spring by Stravinsky. I know a lot about music, I studied music when I was young and almost entered the conservatory of music in Holland, but instead became a dancer. I’ve always had such a respect for that score, the Rite of Spring, it’s the hardest score musically to choreograph, point zero, that’s it. And I’ve seen so many choreographers who, musically, didn’t make it, so for me it was something very satisfactory to make a successful Rite of Spring.

He was extremely inspiring and the knowledge that he had about music and art was amazing. Unfortunately, when I met him he was sick already. In one way it was a very inspiring time and at the same time, quite sad to see how he was deteriorating.

What will you do next?

I’m going to make a new piece in Dusseldorf for Ballett am Rhein that will be shown in January. I don’t have a title for the piece yet, but it will be to a piece of music by Henryk Mikołaj Górecki, a Polish composer who died three years ago. It’s a beautiful piece of music, called Symphony No 3, Symphony of Sorrowful Songs, very emotional music that has to do with the Second World War. I’m starting to work on this in September and I have a lot of time to work on this, which is a luxury.

Any advice for young choreographers, what mistake do you see them making?

Don’t try to reinvent the wheel. I made the same mistake. They try to squeeze a thousand steps in one minute, they have to learn the art of eliminating everything that is not necessary, simplifying and bringing it back to the essence. When you’re young you’re just galloping. So often I see a ballet with material for three ballets.

Organ Concerto will be performed at the Esplanade Theatre as part of “Masterpiece in Motion” on August 23 and 24.