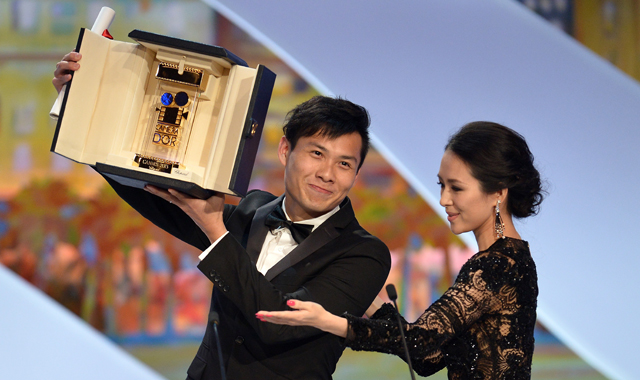 “Ilo Ilo” by Anthony Chen received the Camera d’Or in Cannes for Best First Feature Film, making it the first win ever for a Singapore feature film at the Film Festival. The award was presented to Chen by President of the Jury, filmmaker Agnès Varda and actress Zhang Ziyi.

“It is a complete surprise and I'm still trying to take it in,” said the young film maker in an email statement, “What really heartens me is that a story about an ordinary family in Singapore can touch the hearts of audiences miles away. The Camera d'Or is the most prestigious award for a first time feature film director and there is nothing more I can ask for with this very humble first film.”

Ilo Ilo premiered at the Director’s Fortnight section in Cannes on May 19 and despite technical difficulties at the screening received a standing ovation. The film, which took three years to make and was shot with a budget of S$500,000, tells the story of a Singapore family coping with the 1997 financial crisis and the entry of a domestic worker into their household. It stars Malaysian actress Yeo Yann Yann, television veteran Chen Tianwen and award-winning Filipino actress Angeli Bayani.

Previously, Chen’s short film, “Ah Ma (Grandma)” (2007), had been nominated for the Palme d’Or for Short Film at the 60th Cannes Film Festival, and secured a Special Mention.

“This is a big step for Singapore film in general, one that will associate Singapore films with quality in the eyes of international audiences, media, investors and critics. What we are excited about is showing our film back home later this year because at the end of the day, Singapore films record the stories of Singaporeans,” says producer Yuni Hadi.