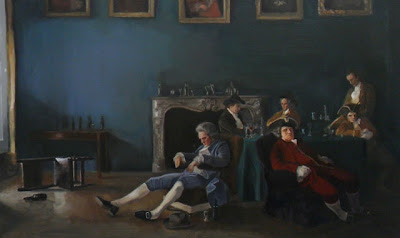 For the last 10 years, Justin Loke, 33, has been part of the art collective, Vertical Submarine. Now the 33-year-old artist is venturing for the first time alone in a solo show, entitled “The Seven Scenes of Barry Lyndon” at Objectifs Gallery.
The award-winning collective, whose name is a play on the word "subvert," is known for its witty art installations, which have earned them the 2009 Singapore President’s Young President Award.

Loke is quick to reassure he’s not leaving the collective. “I had this idea that I wanted to explore. I have this interest in painting, and it’s something I wanted to do. We have many other ideas and projects we’re working on. And I didn’t want to use the tongue-in-cheek approach Vertical Submarine usually takes. This show is definitely not funny, no pun, no jokes,” the artist explained.
For his first solo shoe, Loke is exploring ideas of framing and composition, as well as medium specificity. He will be creating an installation based on scenes from the period film "Barry Lyndon" (1975) by Stanley Kubrick.
“There are paintings I’ve done, based on the film, that are then framed within a larger picture,” he explains, “I’m really playing with the idea of framing.”


Loke explained he was interested in Kubrick’s work in the film after noticing all his reference to 18th century painting, in terms of composition and style of cinematography, such as William Hogarth. “Kubrick appropriated an idea from oil painting, and I’m trying to put it back into oil painting. I also read that he shot a lot of his scene under candle light and so I’m also reprising this idea with the exhibition lit by candles light,” he adds.
Loke could not completely brush off the tongue-in-cheek humor of Vertical Submarine though. The title of his exhibition Seven Scenes is a pun on the seven sins, referencing to the life of Barry Lyndon.
The Seven Scenes of Barry Lyndon at Objectifs Gallery, 56A Arab Street, 24 April to 20 May 2013