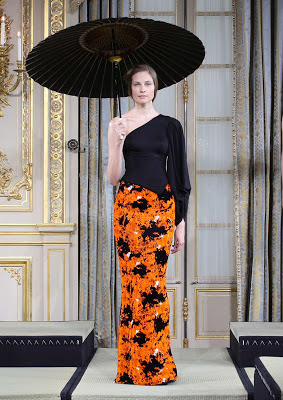 A Japanese koi pond in Ubud, Bali was the starting point for the latest couture collection of Indonesian designer Didit Hediprasetyo, who described the overall feel as “Zen-like.” 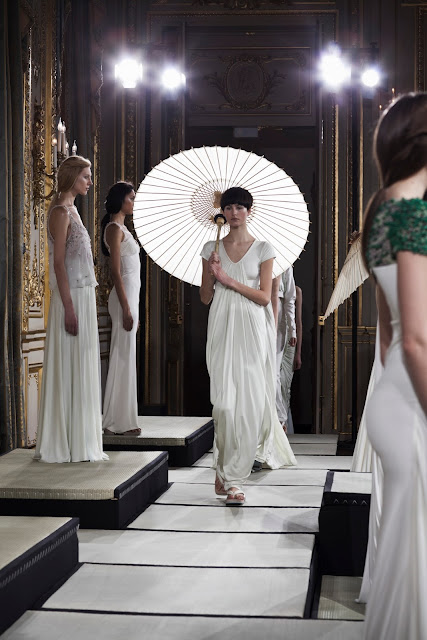 This inspiration was clear to see in the abstract prints he created with textile designer Calla Haynes which echoed the fish scales of colorful koi fish (orange, blue, black) just swirling abundantly under the surface of a clear water pond. The busy prints were sparingly reprised in several looks creating a cohesive collection that still managed to remain fairly minimalist and beautifully elegant.

Instead of a runway presentation, the designer opted to present the collection like a series of tableaux. Models wearing relaxed flip-flops slowly walking to the beat of a taiko drum to take their place, some carrying traditional Japanese umbrellas. “I felt there would be a stronger energy, having all the simple silhouettes standing together,” he explained in an email after the presentation in Paris on the sideline of Haute Couture Week. 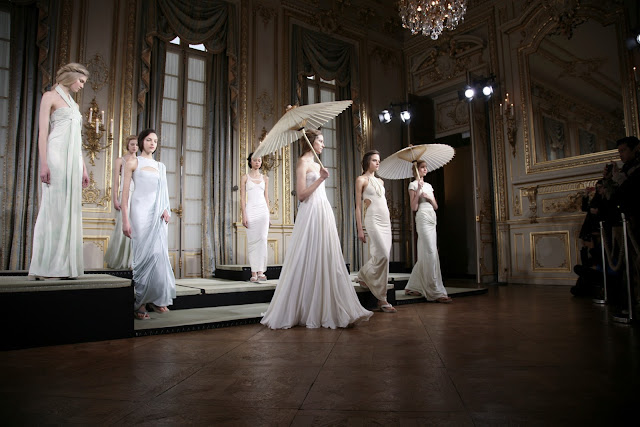 While his previous collections had created volume with the use of more rigid fabrics like the songket, a traditional Indonesian fabric, or ostrich leather, this time the designer primarily chose a more fluid fabric, silk jersey, that he let fall elegantly to the floor creating elongated silhouettes. The designs retained a sense of youthfulness and playfulness with cut outs around the décolleté.

“I wanted to do a collection of comfortable long dresses for the summer, pure, simple, and regal,” he said.

The single-shoulder dresses and their draping brought to mind Indian saris, though treated here in a minimalist way.

Born and raised in Indonesia, the 28-year-old Hediprasetyo presented his first couture show in the salons of the legendary hotel Crillon in January 2010, offering corseted gowns, and fitted skirts and shorts all in a palette of white, black, and gold that emphasized elegant silhouettes. Since then, the young designer has taken his clients on a voyage to colonial-era India as well as through a tropical orchid garden.

The designer tends to focus more on a younger clientele aiming to offer them wearable daily couture.