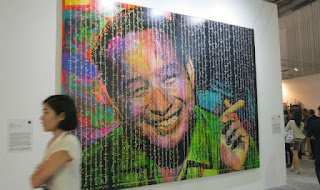 Art Stage Singapore director Lorenzo Rudolf set out to establish a fair that would support Southeast Asian artists and act as “a door” for the world to come in and find out how vibrant the region’s art scene currently is. With his Indonesian Pavilion — which had irritated some galleries and critics since it was first announced — Rudolf showed the fair is making strides in the right direction.

For many of the early visitors invited to the VIP preview and then the opening vernisage, the Indonesian Pavilion was proving the main draw and the general feedback was extremely positive.

The pavilion brings together 36 Indonesian artists and art collectives in a large space at one end of the Marina Bay Sands exhibition hall which was spacious enough to allow for the large works to look their best and the open space drew in visitors who may not have been aware that the area was not set up by galleries.

While a few pieces, like the two globes by Rudi Mantofani would be familiar to many of the visitors, most of the artworks were new to the market, many especially created for the fair. 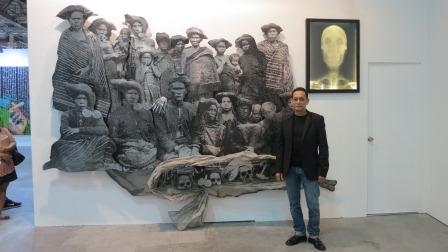 Amongst the highlights was a mixed-media installation by Aditya Novali, who was part ofProject Stage at the fair last year. The work, “Unscale Reality,” is made of coated steel, wood, copper, aluminum, paint, LED fabric, Plexiglas, and resin, and included some interactive elements with miniature rooms on rotatable discs almost hidden amongst the dense grilles, each one referencing the art world’s main players.

Dipo Andy, better known for his re-appropriations of images of celebrities incorporating bar codes, tackled the image of the late President Soeharto, a welcome change in an Indonesian art landscape that has seemed to rely too often on inspiration derived from China or Hollywood. Moreover, the mixed-media piece (acrylic, lacquer, stickers, and silkscreen) denoted a shift in the artist’s style, where he has now replaced the commercialized bar code with a more traditional medium, Javanese script. 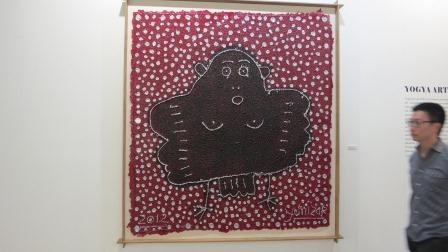 Another artist unveiling a departure from his more recent works was Pintor Sirait, better known for his full-sized Formula One cars and his 2-D sculptures with bullet holes. With Me and My Family, the artist dwelled on his Batak cultural roots. Using an old photographic image enlarged and transferred onto etched stainless steel, and presenting it next an X-ray of his own skull, he linked the two with a skeletal hand seeming to reach from behind in a familial manner.

Thai artist Manit Sriwanichpoom says he liked the Indonesian pavilion idea recognizing that sometimes it may be the only way some artists will get more exposure. “It’s a good introduction for collectors to the country,” he quipped.

Outside of the organizers’ Indonesian Pavilion, there is also a strong showing of Indonesian artists for example, at Gajah Gallery which showcased two I Nyoman Masriadi (both sold quickly for around $300,000 and $200,000, respectively), and Yogya Art Lab unveiled its first collaboration with Yunizar. One of the pieces was an interesting paperwork with molten lead, a technique master papermaker and sculptor Richard Hungerford experimented with to create the piece.


As first published on ARTINFO.COM