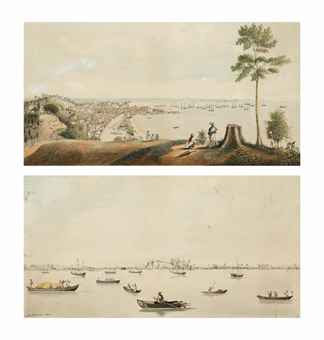 Christie’s London Press Office will auction on October 9 two of earliest views of Singapore, dating to around ten years after the British landed.

First settled by company agent and Lieutenant Governor of Bencoolen, Sir Stamford Raffles and his East India Company flotilla in 1819, the first view of the settlement is thought to be the pencil sketch by Lieutenant Philip Jackson, dated 4 June 1824, showing Mount Sophia and the wooden attap houses on the north bank of the river.

The present panorama of Singapore from Mount Wallich (named for Dr Nathaniel Wallich who co-founded the Botanical Gardens with Raffles in 1822), shows from left, Mount Erskine and its bungalow, with Government Hill (after 1859 known as Fort Canning Hill) and its bungalow (Government House) and flagstaff, the bungalow built by Raffles in 1823 and subsequently purchased by the Straits Government and the home of the British Resident in Singapore, to the right of this, John Argyll Maxwell's house (from 1843 government offices and Court House), and Telok Ayer Street, lined with shophouses, runs near the coastline, with Telok Ayer market (built in 1825) jutting out into the sea. Mount Wallich was levelled in the 1870s and Maxwell Road runs through the site today.

The second view shows how Government Hill dominated the view taken from the sea, or roadstead.

Janssen, an itinerant Prussian-born artist, known primarily for his Brazilian and Australian views, was in Singapore in 1837-8, in between his stay in Calcutta (where he resided from the early 1830s), and before sailing on to the Philippines and his eventual destination, Sydney, where he arrived in December 1840, and where he would settle for the rest of his career.