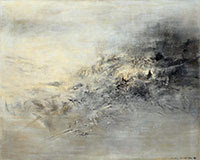 This fall, Christie’s Hong Kong will present the first Christie’s Art Forum, a series of events beginning in October, which include gallery tours of Asian 20th Century & Contemporary Art, a lecture hosted by The Barnes Foundation, and a panel discussion exploring the concept of “East Meets West.” Highlights from the autumn 2012 auctions will tour to 9 cities in Asia.

This season’s highlights extend to a collection of fine antique Chinese furniture offered at auction in Asia for the first time, and an exhibition of contemporary Chinese ink painting. Of particular note, is a pair of large huanghuali square-corner display cabinets dating to the 17th or 18th century, as well as a pair of zitan lantern stands, all of which are being offered for the first time in Asia. Furniture rendered in these classical styles are highly coveted by collectors worldwide, and increasingly difficult to source as fine Chinese antique furniture rises to prominence as a global collecting category.

From October 5 to 7, Christie’s team of specialists will lead daily gallery tours of Asian 20th Century & Contemporary Art at Christie’s Hong Kong office gallery in Central. Judith Dolkart, Deputy Director of Art and Archival Collections and Gund Family Chief Curator, The Barnes Foundation, will present the lecture, “To See as the Artist Sees: Albert C. Barnes and the Experiment in Education,” while Eric Chang, Christie’s International Director of Asian 20th Century & Contemporary Art, will host a panel discussion titled, "The Art World Becomes One,” which will reflect on the ways in which artists from the East and the West are distinct, yet continually influential upon one another.

From October 13 to November 16, select highlights from the autumn 2012 auctions will tour to 9 cities in Asia. Following this series of previews, Christie’s Hong Kong will hold its autumn auctions from November 23 to 28.