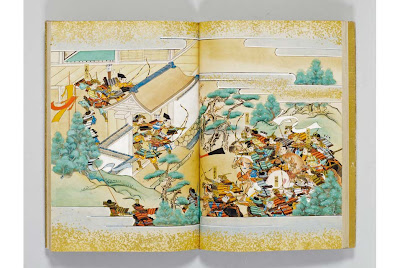 Hasegawa Tonin’s Egrets and Ducks in a Winter Landscape is a fusuma (set of interior sliding doors) mounted as three two-panel screens, which were once part of a continuous panorama of birds surrounding a large auditorium. The doors were originally installed in Akashi Castle, in southern Hyogo Prefecture, which was built circa 1618 by Ogasawara Tadazane, founder of the Kokura clan, and was later demolished in 1874, leaving only ruins around the two remaining turrets.

The screens were rescued in 1628 when the castle was on fire and are incredibly significant, as they demonstrate the evolution of the Hasegawa School, founded by Hasegawa Tohaku in the 16th century. Egrets and Ducks in a Winter Landscape was painted in a gorgeous color and gold, a style embraced by the Hasegawa School. The remaining sets from Akashi Castle are currently at the Freer Gallery of Art in Washington DC. 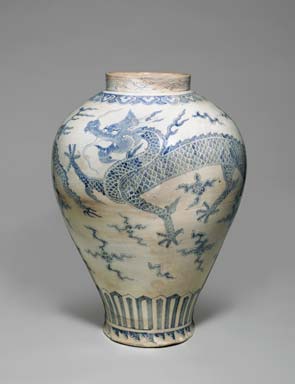 This monumental blue and white porcelain dragon jar of the 18th century Joseon dynasty is one of hte highlight of hte Korean section. It was painted in a cobalt blue underglaze and was almost certainly commissioned by the royal courts.

The vessel depicts two striding dragons chasing a flaming pearl; developed in China, but adapted by Koreans, the juxtaposition of these two figures has come to represent the pursuit of knowledge. By the 15th century, the dragon, particularly the five clawed dragon, had come to represent the emperor in China and the king in Korea. The central purpose of the jar was not for the display of cut flowers or branches, but rather for the elegant storage of wine and other liquids. The bold form, vibrant brushwork, and silvery hued cobalt clue in light and dark tones make this an exceptional 18th century dragon jar. Standing nearly two feet tall, its immense size pushes it to a virtual one-of-a-kind category.