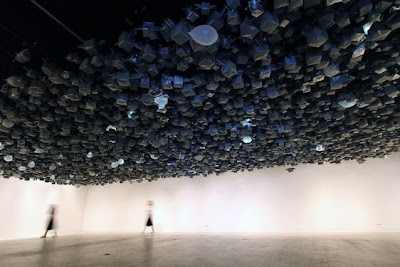 Thai artist Pinaree Sanpitak is participating in the 18th Biennale of Sydney with a major installation, Anything Can Break, at the Museum of Contemporary Art Australia (MCA).


Installed in a double height gallery of the museum’s new wing, the installation comprises hundreds of origami “flying cubes” and breast-shaped glass clouds suspended from the ceiling. Illuminated by fiber optics, the cubes and clouds are lined with motion sensors that trigger musical motifs in response to the audience’s movement. 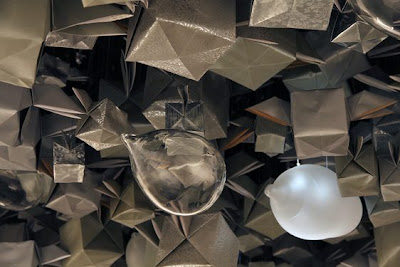 Sanpitak is one of the most established Thai artists. Over the years, her primary inspiration has been the female body, distilled to its most basic forms and imbued with an ethereal spirituality. The quiet, Zen-like abstraction of her work owes something to her training in Japan and sets it somewhat apart from the colorful intensity of much Thai art.

Her focus on the female form, explored through a variety of media – painting, drawing, sculpture, textiles, ceramics, performance, and culinary arts, to name but a few – has resulted in a varied body of work.

A central motif of her work has long been the female breast, which she relates to imagery of the natural world and to the iconic forms of the Buddhist stupa (shrine) and offering bowl.

One of her most iconic works has been an interactive installation of breast-shaped bag (as seen at SAM last year). 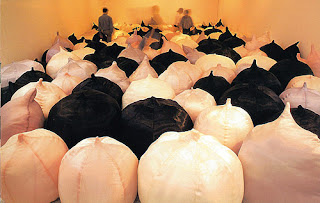