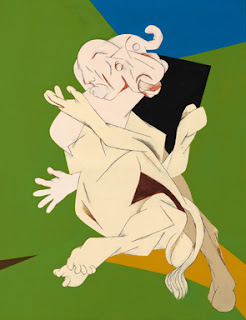 The top lot of Christie's London sale on Jun 11 will be Mahishasura, 1996, by Tyeb Mehta, the most important painting from this groundbreaking series to come to auction.

The revered Indian painter spent the majority of his life contemplating the human condition; his subjects sometimes illustrating his disillusioned vision of the modern day world.

Stylistic devices evident in the present work - such as the simultaneity of perspective and figures, the juxtaposition of linear and volumed representation, and varying frontal and profiled angles of vision - conjure images of Pablo Picasso’s pivotal work, Guernica. Just as Mehta was inspired by the bull, Picasso also regularly depicted multiple forms of the bull and most often the mythological creature, the Minotaur.