Superb caligraphic works coming up at Christie's HK in May

The Fine Chinese Classical Paintings and Calligraphy category has been doing extremely well at auctions in recent years. Christie's has just unveiled its line up for their May 28 auction, which presents superlative Chinese classical works by Ming master calligraphers and painters such as Dong Qichang, Bada Shanren, Wang Duo, Zhu Yunming, Chen Hongshou, Wu Li, Shao Mi and Zhang Reitu.

Top of the list will be Poems in Running Script Calligraphy (1555-1636)  by Dong Qichang (above), a painter, scholar, calligrapher and art theorist during the late Ming period. Best known for his works during the later years of his life for his running and cursive scripts, Dong created his own style by fusing elements from Jin, Tang, Song and Yuan calligraphy. But instead of imitating them, he surpassed the old masters with a novel creativity that favoured expression over strict imitation of classical forms. Deeply influential, Dong established the "Dong school" of aesthetics, and his landscapes give unique spatial perspectives that are both refreshing and beautiful for the beholder.

This piece exemplifies some of the landmark features of Dong’s calligraphy, from clear spatial composition, to the fluidity and inner strength of his brushstrokes to the variety of ink washes – all of which interact in wonderful ways to create characters that come to life with spirit and sensibility. Dong Qichang’s influence on calligraphy was unparalleled, and his works were particularly treasured and respected by Emperors Kangxi and Qianlong of the Qing dynasty. 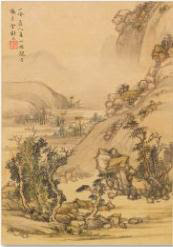 Shao Miwas a landscape painter, calligrapher, and poet during the Ming Dynasty (1368–1644), whose works were known for their pure taste and simplistic brushstrokes. The highlight here is an album of ten leaves in ink and ink and colour on silk - Landscapes after Old Masters. Skillfully playing with texture, space, light and strokes, Shao weaves together natural scenery and human habitation into a harmonious picture, evoking a sense of peace and quietude that so many painters of the time yearned for. The lightness of being and closeness to Nature equally resonates with present-day sentiments.

Another interesting calligraphic work is Wang Duo's Calligraphy in Cursive Script. Born in Mengjin, Henan Province in China, Wang Duo (1592-1652) was a late-Ming government official. He was known for his legendary vigorous cursive script into which he added his own features to create a unique form. Together with his contemporary - renowned calligrapher Dong Qichang – the pair were known to each represent the Southern and Northern schools of landscape painting. Featured in this sale is Wang’s ink on paper handscroll entitled

Calligraphy in Cursive Script promises to be a draw for collectors. Reflecting flowing strokes that are restrained yet spirited, this work conveys Wang’s strength of character and profound emotions. A multitalented painter and calligrapher of great diversity, Wang’s refined yet powerful style greatly affected Chinese and Japanese calligraph.