Buy-Bye - Shop till you drop where branding is key

The group exhibition 'Buy Bye,' which I curated, opens today looking at two subjects close to my heart: luxury consumerism and art.. 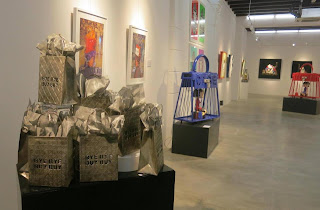 With incomes rising rapidly among Asia’s burgeoning middle class, the region has been transitioning from a savings-culture to one where conspicuous spending is unashamedly celebrated and aspirational goals often revolve around amassing branded luxury goods. Once considered out of reach and reserved only for a minority, many luxury-branded goods such as Louis Vuitton bags are now ubiquitous and dangle from the arms of even relatively junior office staff, 20-somethings who may have scrimped and saved for a long time but are keen to show off and be measured by their instantly recognizable branding of choice.


Today’s newly minted Asian middle classes have an eye for how best to display their wealth and they love nothing more than to brandish a bag that is instantly recognizable by its cherished logo. And luxury brands like Louis Vuitton, Hermes and Chanel have been more than happy to meet the ever-increasing demand in the region’s growing range of glitzy new malls. Even a small island like Singapore with fewer than 6 million inhabitants now has four Louis Vuitton stores.


As the mass-consumption of luxury goods continues to grip Asia, a region that has remained relatively untouched by the on-going European debt crisis, the phenomenon has been observed by artists, not only in China, but also in Vietnam, Indonesia and of course Singapore. Very much like Pop Art artists of the 1960s using logos from the popular brands of the day in their artworks, Asian artists now include the more recognizable luxury brand logos into their contemporary works as a commentary on the growing consumption-culture and the impact it is having on their societies.


Han Yajuan has been looking at her young contemporaries’ seemingly endless appetite for the latest branded fashion accessories as she reflects on the “me-first” generation of newly empowered women in China. Using a cartoonish style, her cute female characters have all the materialistic trappings of successful city girls and live a guilt-free life of consumerism, embracing capitalism and its excesses. But are they happier? By giving perplexed expressions to some of the faces or imprisoning them within their luxury walk-in closets, the artist reveals that not all is well. 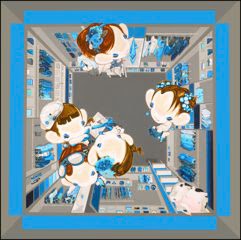 Moving away from the bird’s eye perspective, Han’s most recent works have embraced multiple focal points, consistent with the multi-point perspective used in traditional Chinese painting. This more complicated perspective better reflects the complexity of society and underscores how seemingly unrelated people may actually be interconnected. Bright colours are now mere accents in the painting, which is dominated by monochrome tones. Her girls have seriously toned down their appearance, gone are the elaborated hairstyles and bight make-up, and if they are still “fishing” around for accessories, they are no longer gathering logos, a reflection of what is happening today in a quickly-maturing consumerist society where issues of taste and snobbery amongst the designer baubles differentiate levels of wealth. Showing off now is no longer about toting a mass-produced branded bag, but owning something extremely exclusive, which only those in the know will recognize.

In Indonesia, Astari has long been using the imagery of luxury handbags in her paintings and sculptures to create thought-provoking works that reflect on the fast changing world around her, wittily lampooning society’s, and her own, craving for luxury goods. Always anchored in Indonesian society, her works provoke and amuse at the same time. In Astari’s earlier series Guilt Trip (2009), the artist portrayed herself dressed in Batak costume, balancing an Hermes bag on her head, highlighting the fast changes Indonesian society has undertaken and the personal internal conflicts that can create.

Astari has often used the symbolism of a cage in the shape of an iconic bag, be it Louis Vuitton or Hermes, to represent the trappings of luxury consumerism and the burdens chasing such ‘dreams’ can put on women and society. In Home Bag, she sets the 1930’s cartoon character Betty Boop dressed in a blue Chinese qipao with matching blue shoes inside a birdcage that is a representation of a Hermes Kelly Bag. Once a glamorous self-assured sex-symbol of the silver screen, the cartoon character now appears hesitant and concerned, sitting pretty inside her cage on a suitcase that could mean she’s ready for something new, but not sure how to get there. In Cage, Betty Boop is now dressed in a traditional kebaya and appears rather scared, knowing maybe she can never escape her current position. What someone sees as a status symbol might just be someone else’s prison, the artists warns.

Young artists in Singapore are also experiencing first hand living in a fast-changing society with strong tensions between the haves and have-nots. Shopping is considered akin to a national sport and with the highest density of millionaires per square meter in the world, hunting down the latest luxury goods can often be pretty competitive. Aiman shows in his work Catch of the Day, luxury goods have become our daily sustenance, and TR-381 reflects cheekily in his piece Kids These Days , on what we are teaching our children. Are luxury logos generating a new alphabet for toddlers and why don’t we move on from ‘A is for Apple’ when we show our children that Armani is valued more highly?

The Maneki Neko (or Fortune Cat) and his moving arm is a common Japanese ornament, which is believed to bring good luck to its owner. In Singapore, you can often find it at the entrance of small shops and restaurants. Here, Aiman mixes it with another iconic feline image, Hello Kitty, the immensely popular Japanese cat that has over the years amassed a great fortune. Sitting on a pile of Lego bricks of what seems to form a throne, and which children would play with, Aiman hint to this exposure to consumerism from an early age and how this can shape children character. This rich cat, adorned with a branded collar and bib, is still unsatisfied with his accessories and asking for more with an additional elongated arm for good measure.

Asians’ aspiration for the finer things in life is also taking them beyond the region. Indeed, the globetrotting Chinese tourists spent Rmb300bn ($47bn) abroad in 2011, up two-thirds on the previous year, according to data from China UnionPay, the bank card association of China’s state-owned banks. Justin Lee explores this new found spending in his Happy Meal Series – Paris 2012, presenting the Asian tourist in Paris as someone who consumes culture as well as luxury goods the way one might eat a burger.


But this rise of luxury consumerism is not without its detractors who highlight the toll it takes on society. Buy Bye also present some selected works from around the region to illustrate how artists are taking on a critical look at the issue. Astari’s sculptures often use word play and the symbolism of a cage to underline how we can fall prisoner to our own desires while Pham Huy Thong’s Dong Bao series uses an old legend – that all the Vietnamese are descended from the same womb – to show babies linked by an umbilical cord in search together of a new life-giving pursuit: money. Once brothers in arm in search of a better life, Pham portrays his compatriots now as brothers linked by a more self-serving desire, not just a better economic life for all, but piles of cash that borders on greed.

In The Fall of Saigon, Pham found inspiration in the famous 1975 photograph by Dutch photojournalist Hubert van Es, then working for UPI: the scrambling of South Vietnamese civilians to board a CIA Air America helicopter during the US evacuation of Saigon. In his version, Vietnamese are now merrily trying to board the capitalist transport of choice a Rolls Royce once again with her modified “Spirit of Ecstasy”) that is on top of a tower of US dollar bills.