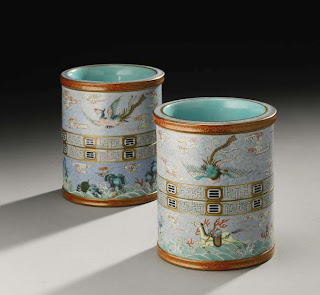 Some slighly disappointing results at Sotheby’s NY sales of Chinese ceramics. The Mar 20 auction only sold 70.4% of its lots and 82.3% by value.  The sale of Fine Chinese Ceramics and Works of Art Sale brought in $20.7 million, above the pre-sale high estimate of $16.8 million, thanks mainly to the two Extremely Rare Famille Rose ‘Heaven and Earth’ Revolving Brushpots, with Qianlong seal marks which had only been estimated at $120/150,000 and $80/120,000 but brought in $3.5 million.


The revolving brushpots came from a Massachusetts private collection and were each just 4¾ inches high. Bidding was ferocious on both pieces, with collectors making extraordinary leaps. At one stage, the auctioneer asked for a bid from the room and was offered $100,000, immediately to be trumped by a Sotheby’s specialist bidding for a client by phone yelled out $1 million. 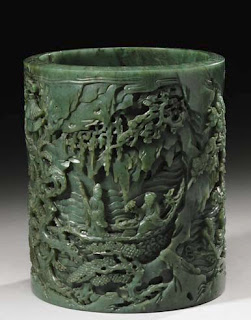 Another brushpot, this time a Spinach Jade Brushpot, Qianlong Period, dated to 1795 bought in $1.4 million, well above its conservative $200/300,000 estimate. Carved from a solid piece of jade, the rim of the superb brushpot is inscribed with a poem composed by the Qianlong emperor and exemplifies the zenith of pictorial carving achieved by craftsmen during his reign 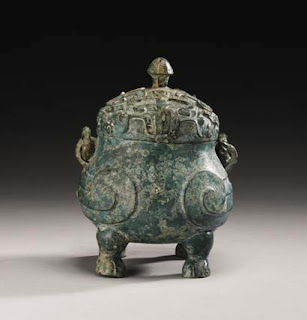 Among the first lots to come up for sale in today’s auction was a group of archaic bronzes, which was led by A Rare Archaic Bronze ‘Double Owl’ Ritual Food Vessel (You), Shang Dynasty, 12th century BC. The double-owl you saw competition from bidders both in the saleroom and on the telephones, finally selling to a buyer for $1,258,500, more than tripling pre-sale low expectations (est. $400/600,000). The work represents an interesting final step on the evolutionary ladder of this intriguing form. The second lot in the auction, and another highlight of this group, was an Archaic Bronze Ritual Food Vessel (Liding) Shang Dynasty, which sold for $254,500, more than four times its high estimate (est. $40/60,000).