Published - Wandering Back in Time 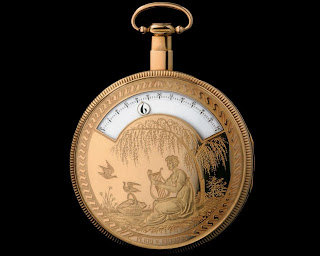 Watchmakers have long sought new ways of expressing time. One of the first unusual presentations was the wandering-hour clock, also called “floating hour dial” or “chronoscope,” which became popular in the 17th century. These clocks did without conventional hands and instead had a semicircular window in the upper half of the dial that revealed the hour numerals in succession, one at a time, as the day wore on.

The minute graduations were on the outer edge of the window and the hour marker traveled from left to right, pointing to the minutes in its passage.
This distinctive design, reminiscent of a fuel gauge on a car’s dashboard, was adopted by Italian and English clockmakers, and found its way into the design of some pocket watches in the 18th century. It has now been given a contemporary interpretation with the Parmigiani Toric Minute Repeater. 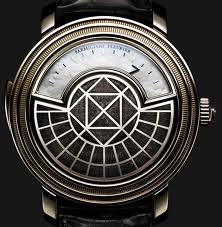 In 2000, Michel Parmigiani was asked by the Edouard and Maurice Sandoz Foundation, the arts branch of the Sandoz Family Foundation, to restore an early 19th-century yellow gold pocket watch with a floating hour dial by Perrin Frères, a watchmaking firm in Neuchâtel, Switzerland. Mr. Parmigiani recalled in a recent e-mail how he was impressed by the fine decoration and the beauty of the piece, part of a collection of rare timepieces and objets d’art owned by the foundation.
“This watch is interesting because it is one of the rare old pieces where the repeating mechanism is enhanced this way,” he wrote.
Mr. Parmigiani founded the Swiss watchmaking brand Parmigiani Fleurier in 1996, with support from the Sandoz Family Foundation, itself established in 1964 by the sculptor-painter Edouard-Marcel Sandoz, a member of the family that started the pharmaceutical company that became Novartis.
Inspired by the Perrin Frères pocket watch, the Parmigiani Toric Minute Repeater wristwatch reprises the special display function, with a new movement made entirely by the Parmigiani manufacture.
The Perrin Frères pocket watch is engraved on its front with a pastoral scene of a lady playing a lyre while seated beneath a weeping willow tree. The Parmigiani white gold Toric is engraved with a more contemporary geometric pattern. But faithful to the original design of the wandering-hour pocket watch, the Toric tells the time through an arc-shaped aperture at the top, marked off in five-minute intervals.
The mechanism includes three planetary gears, each with four arms. On the end of each arm is an Arabic numeral to show the hour. Each arm travels the arc in 60 minutes, to be replaced, as its trajectory ends, by the next in succession.
In addition to showing the time, the watch also offers a minute repeater mechanism that sounds the passage of the hours, quarter hours and minutes, using small hammers to strike a set of gongs known as cathedral chimes, made in blued steel and coiled in an unusual snake-like shape. The minute repeater mechanism can be seen through the sapphire crystal covering the back of the watch.
This story was first published in the