on March 23, 2012
Men’s Fashion Week Singapore  is returning for its sophomore year Apr 18-22 with an interesting new list of Asian designers, loaded with Korean and Japanese names.


Songzio (Korea), Bodybound (UK) and Reckless Ericka (Singapore) are the only 3 returning labels from last year, a strategic decision by the organizers who want to present new labels to the region.  Songzio is actually skipping Seoul Fashion Week, which is taking place early April, to show instead in Singapore.

From Korea: Songzio, Beyond Closet (designed by Tae Yong Ko, this label is stocked in New York and has shown in Las Vegas, New York and Paris), D.Gnak (launched in 2006 by Dong Jun Kang and showing in London Fashion Week, focusing on tailored menswear with twisted details), General Idear (launched in 2004, the label’s designer Bum Suk Choi has collaborated with Absolut Vodka, Heineken, Puma and Renault F1, amongst other brands), Ressurrection (designed by Lee Ju Young, already showing in New York and Paris and with celebrity fans in The Black Eyed Peas, Lady Gaga and Marilyn Manson) and Vandal (designed by Heemin Yang, the label has been selected as one of the upcoming brands to watch by Gap Press Men).

From Singapore: Reckless Ericka, one of my favorile local brands, which will show a mix of quirky and colourful creations.

From UK: Matthew Miller (a recent graduate from the Royal College of Art whose 2nd collection was picked up by Selfridges), Casely Hayford (who had styled and dressed The Clash and U2), Spencer Hart and Bodybound

From France: Alexis Mabille who will show his Autumn/Winter 12 menswear collection, alongside a capsule underwear range in collaboration with HOM.

From USA: Richard Chai, recipient of Council of Fashion Designers of America’s Best Menswear Designer Award in 2010.
From Germany: MCM 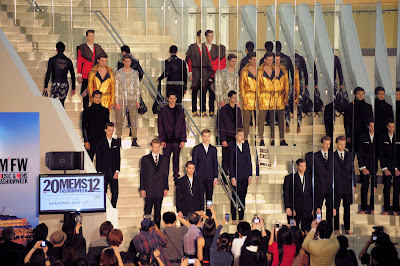 Hisashi Fukatami, the creative genius behind the label Diet Butcher Slim Skin, has achieved a cult following with his collection. Check out his fashion "installation" next to the CHANEL store at MBS, which has wax statues of the designer at various stages of his life at 20, 30, 40 and 60 sitting around a table playing poker and what he would be wearing at that moment in his life. The looks varied from a casual shirt and jeans to a tailored men’s suit with an interesting graphic pattern. 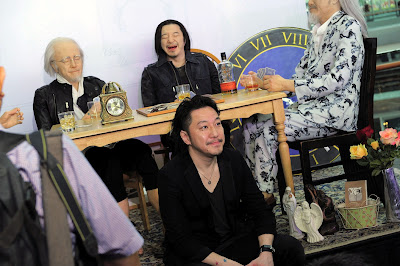