Another good news for Singaporean artists. After Heman Chong having a solo show in London, it's the turn of Jane Lee to have her first solo exhibition in New York at the Sundaram Tagore gallery, starting April 5! 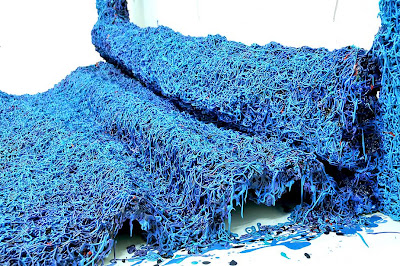 Jane Lee: Beyond will highlight her innovative techniques and use of materials in paintings which create interesting 3-D effects (she uses a seringue to drip paints on canvas or in empty air in a laborious process that creates interesting colorful landscape of ridges, crevasses, etc) 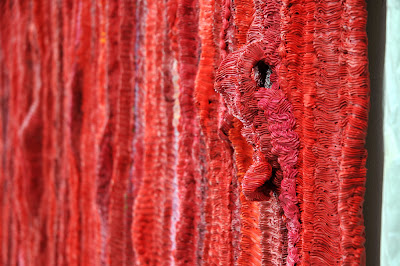 Lee has been reflecting on the what constitutes a painting and how are paintings made for several years. The highly tactile, sensuous surfaces of her works push the materiality of painting into the realm of sculpture, adding a third dimension to the conventionally flat genre.

In Without Canvas, Lee dispenses with canvas altogether as the title implies, putting acrylic paint directly on wooden stretchers, which results in a hollow, three-dimensional object, with the paint at the bottom seemingly giving in to the force of gravity. 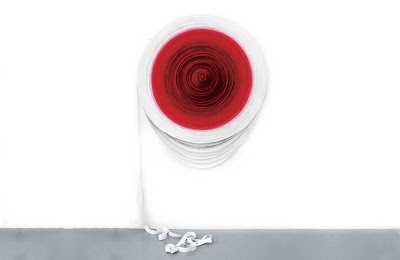 For Turned Out II, for which Lee won the Celeste Prize 2011 for painting, she painted long, narrow strips of canvas with acrylic paint then rolled them into a circle, which is mounted on the wall. The resulting object—which resembles a hose or a reel of cord—is more sculpture or wall relief than painting. In this case, the material conventionally used as support for a painting—the canvas—is the focus and defining component of the artwork rather than paint.

Another of Lee’s techniques is to create works that appear to move: they fall, unroll, hang or droop, suggesting, in the process, everyday objects (a hose, a carpet, a door). The paintings are mounted on the wall, the floor, and in the corners of the room. With this strategy of activating the spaces in which her works are being presented, she uses space itself as a medium. 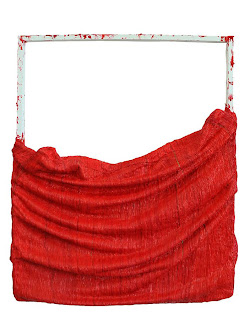 Jane Lee has already won numerous awards in addition to the Celeste Prize. She was a finalist for the 2007 Sovereign Art Prize and was the first recipient of the Singapore International Residency Art Prize in 2007. Her work Raw Canvas was showcased at the Singapore Biennale 2008 and Collectors Stage at the Singapore Art Museum in 2011.