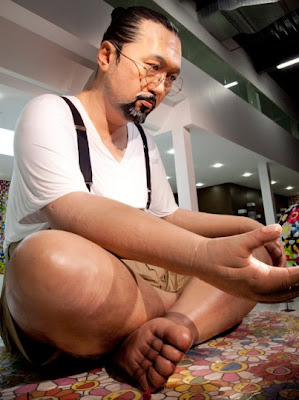 For his first exhibition in the Middle East and one of his largest to date, Japanese artist Takashi Murakami has immersed visitors in a fantasy world that captures his distinct perspective on contemporary culture.

He may be one of the highest earners in the world, but Murakami never takes himself too seriously. The exhibition at the Al Riwaq exhibition space in Doha is titled "Murakami – Ego,' and the tone is set from the start with a giant 6-metre high inflatable sculpture of him greeting visitors! In a striking difference from his usual signature style, Murakami depicts himself realistically, seating like a giant Buddha extending his hand outwards in a gesture of greeting. 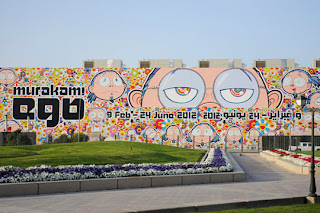 Following major retrospectives at the Museum of Contemporary Art, Los Angeles, and at the Château de Versailles, Murakami – Ego is the final chapter in the worldwide trilogy of exhibitions that have established Takashi Murakami as one of the most fascinating artists working today.

Curated by Massimiliano Gioni, the exhibition feature more than 70 works from 1997 to the present, on loan from leading international institutions and private collections, as well as several new works created especially for this show. 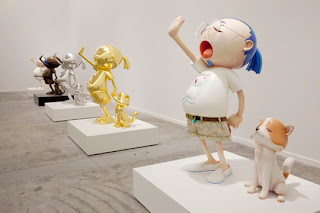 Murakami – Ego's set up gives the impression of walking inside a three-dimensional self portrait, as visitors step inside the mind of an artist that is populated with hundreds of different characters.

The exhibition brings together a number of important series within the artist’s oeuvre which have never been fully assembled before, providing a rare opportunity to observe the full scope of the themes and methods which have defined his work.

The exhibition feature some of the artist’s most celebrated series, including “Kaikai Kiki Lots of Faces” and “Pom and Me,” which will be presented in their entirety for the first time. For this presentation, Murakami has conceived of the exhibition itself as a work of art, creating new modes of display that include sculptural pedestals with digital animation, a circus tent that doubles as an indoor cinema, and a new 100-meter-long painting that wraps around the exhibition space.

Murakami – Ego also offer a behind-the-scenes look at the artist’s process of creating a large-scale sculpture, with hundreds of drawings, models and studies for a new Daruma work.