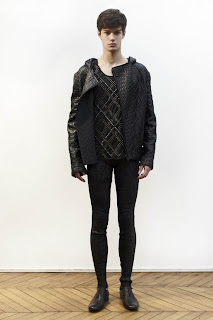 Young Singaporean designer Kim Wilkins is flying the flag at the prestigious Hyeres Fashion Festival, which this year is judged by Yoji Yamamoto. He is one of 10 finalists selected out of 250 applications from 50 different countries. The winner will be announced mid-April (previous alumini of Hyeres include Gaspard Yurkievich, Henrik Vibskov and Viktor & Rolf)


After working on the Menswear collection of Mathew Williamson in 2010, the London-based young designer launched last year his own men label, Bodybound, which focuses on knitwear. In 2011, he presented at the Men’s Fashion Week in Singapore a strong, highly structured knitwear collection, full of interesting studded details. It had a Mad Max roadwarrior meets Samurai man feel, with exaggerated zipper crotch details, broad shoulders and spikey studded shoes. The dark knitwear, which was made after hours of computer programing, had a luxurious feel with an unusual froisse effect.


Wilkins is now planning to show his new collection at London Fashion Week on the menswear day (feb 22). This time he’s using far more “sympathetic” materials, though the studs have made a come-back.
This new AW 2012-2013 collection is called "DYSTOPIA" and draws upon Aldus Huxley’s “Brave New World” as inspiration for an imagined future. Above is a teaser image of the new collection who got him selected for Hyeres.