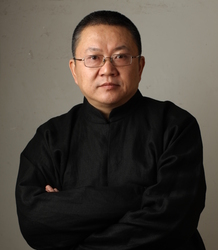 "The fact that an architect from China has been selected by the jury, represents a significant step in acknowledging the role that China will play in the development of architectural ideals," Thomas J. Pritzker said in a statement. "In addition, over the coming decades, China's success at urbanization will be important to China and to the world."

Some of Wang's designs include the Ningbo History Museum, the Wenzheng College library at Suzhou University which is partly underground, the first two phases of the Xiangshan campus of the China Academy of Art and the Vertical Courtyard Apartments.