Slow sales at Art Stage as collectors take their time 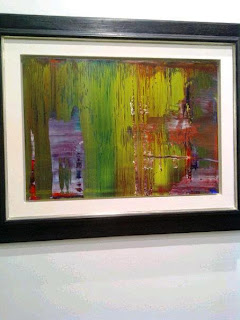 This smallish painting by Gerhard Richter sold for 1.2 million euros at Art Stage, which seems to be so far the highest price paid for a work of art at the fair. Michael Schultz Gallery, which sold the Richter, was indeed very happy today as it also managed to sell 2 works from a Chinese artist and 3 works from a Korean one.. But not all galleries were happy, many complained collectors either aren't there or were not buying.. Is the recession biting? or has this more to do with galleries proving a bit more adventurous, with many moving away from secure blue chips to offer artists unknown to many collectors? Or could the Borobudur-Larasati auction, held during the fair right above have canabilized the buyers?

To be sure, the fair has actually more (big) collectors walking its aisles this year than last year, but they are not rushing to buy. What sold were names like Tracey Emin at Lehmann Maupin for S$109,000, I Nyoman Masriadi for at Gajah Gallery for $350,000 and Ranbit Kelala's four channel video projection. Works by emerging Singaporean artists were also selling very well at prices below S$10,000.

All collectors I talked to were saying works were of better quality this year, yet even Budi Tek (now reportedly buying more than Pinault) only bought two pieces on the opening day.

While the fair devoted space for large installation works and putting those right at the entrance made a clear statement, one could have wish for even more space to give justice to those hufe paintings (it was hard to take them all in, as they were so close to the entrance.

I personally love the works of Chen Chun-Hao, a new direction for this Taiwanese artist, who is now using tiny nails as ink paint, the shadow effect created by those are just beautiful. Needless to say, two of his three paintings at Tina Keng Gallery were sold by Friday.

One big disappointment of the fair was the offering at White Cube. Expectations had been high the gallery would make a big splash, but the works by Damian Hirst and Marc Quinn didn't seem that fresh for Asian art collectors who have seen plenty of those in recent years. The gallery did sell two smallish piece by Anthony Gormley and a Tracy Emin's neon sign and there was a beautiful large work by Gilbert and George, the British artists who will open White Cube's new gallery in Hong Kong later this year.