In 1968, actor Richard Burton purchased the 33.19 carat Krupp diamond for his wife Elizabeth Taylor for $300,000, at the time the highest price ever paid at auction for such a diamond. She mounted it as a ring and wore it nearly every day. The diamond is now coming up at auction again this time with an estimate of $2.5-$3.5 million, the increase more or less mirroring the performance the Standard & Poor's 500 Index during the period.


Top quality diamonds have proven good investments for buyers over the long term.  In the last 10 years alone, average per carat prices for top stones at auction have risen by about 30 to 40 percent, says Rahul Kadakia, Head of Jewelry for Christie's Americas. 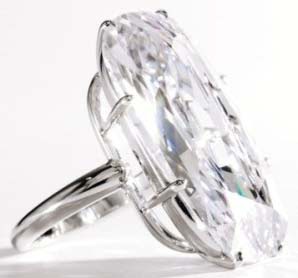 “In 2000, 25 carat D Flawless diamonds were selling for about $50,000 per carat. Earlier this year, Christie's sold a 25 carat D flawless stone for $150,000 per carat,” he says, adding the same is true for fancy vivid quality colored diamonds – a category that has seen tremendous growth, driven by increased collector interest from new markets in Asia, Russia and the Middle East. “Per-carat prices for top blue and pink diamonds have just about tripled over the course of ten years,” he says.  Even amidst the current economic uncertainties and financial turmoil, the auction market for rare colored diamonds of superb quality has remained healthy.
“Recent auction results indicate that diamonds remain fairly immune from the financial gyrations as gold, with the added value of perfect portability. High-end prices have doubled in five years,” notes Francois Delage, CEO of De Beers Diamond Jewelers, which is planning to open a second boutique in Moscow in early 2012. “In the case of  beautiful fancy coloured diamonds,  the supply is so small and the demand so constant, especially with new buyers from Asia being introduced, that they have risen faster in price than even the larger D color, internally flawless quality diamonds above three carats which were traditionally the best investment,” Mr Delage says.
Flawless white or “colorless” diamonds might be the most sought-after when it comes to engagement rings, but colored or “fancy” diamonds are actually much rarer and so can fetch a much higher price per carat.
At the latest Sotheby’s Hong Kong jewelry auction in October, the top item, a 9.27-carats fancy vivid pink VVS1 diamond, did not find a buyer, but two fancy vivid diamonds set new world record prices. A 6.01-carats fancy vivid blue diamond sold for $10.14 million or $1.68 million per carat, breaking the previous record, set in 2010, of $1.43 million per carat for a fancy vivid blue diamond, while a cushion-cut fancy vivid orange diamond weighing 4.19 carat sold for $2.96 million, or $705,669 per carat, breaking the previous world record of $238,718 set in 1997 by The Pumpkin Diamond.
In October at Christie’s New York, an extremely rare pear-shaped Vivid Yellow diamond of 32.77 carats sold for $6.6 million or $201,000 per carat. The current world auction record for a fancy vivid yellow diamond was achieved by a marquise-cut fancy vivid yellow diamond weighing 13.83 carats, which sold for $3.3 million in 1997 or $238,792 per carat.
The top price for a red diamond was achieved back in November 2007 with a 2.26 carat fancy purplish-red diamond ring selling for $1.18 million a carat, while the current world record per carat price for a Vivid Green Diamond was set in 2009 at $1.22 million.
“Investment-minded collectors and dealers continue to see diamonds as a tangible asset that adds strength to any investment portfolio. Over the last few years, when we've seen volatility in the stock markets and dramatic swings in currency rates, the jewellery auction market has shown great resilience, to the point where Christie's recorded its highest sales total ever in 2010 at $426 million. Demand comes from both an influx of new investors and from our long-standing private and trade clients who have long understood that diamonds, gemstones and vintage signed jewels can be a very stable, long term asset,” Mr Kadakia says.
Mr Delage points out that even with new diamond mines being discovered extraction does not meet the predicted future demand, thus diamonds should continue to be “an excellent long term investment.”
But he also offers a word of caution, stressing that a diamond must be beautiful as well as rare, or buyers will not fight for it if one wants to resell it. “A diamond is as good an investment as art if you buy for your own pleasure as well as for capital appreciation. But it must be beautiful first of all and shouldn’t be bought on paper, just based on its grading report. There are many aspects to a diamond’s beauty that are not documented on a diamond grading report, and therefore you must actually look at the diamond you are interested in and choose it for its individual beauty,” he says, pointing out that one third of all diamonds are slightly dull looking, lacking in brightness, “a difference similar to that of bright mountain water and tap water, both are clear according to the laboratory report, but only one is bright and beautiful.”
Lisa Klein, Executive Vice President and Director of Marketing at LEVIEV-KLG Jewelry advices “if one is buying for investment purposes, then they should choose the top quality diamonds.  These top quality stones have continued to steadily increase in value over the past few years, quite a feat in this very fragile business world.”


“The strongest colored stones of any color – blue, pink, green – have appreciated and will continue to appreciate in value.  As diamond manufacturers, we have seen first-hand as the supply of these incredibly rare stones has decreased over the past few years, while the demand for these stones has continued to steadily increase, causing them to appreciate consistently in value. In addition, one thing to keep in mind is that these rare colored diamonds have always been sought after by a very discerning group of individuals. As they become increasingly more rare, it only makes them more valuable and desirable,” she says.
Mr Kadakia advises people to “always buy what you like, and buy the best quality that you can afford.” He also points out that large flawless white diamonds are universal in appeal. “A D color diamond is the best quality whether you are in New York, Bombay or Hong Kong. By contrast, collectors may prefer one shade of pink or blue over another with a colored stone, so personal preference can come into play when it comes time to sell a particular stone,” he notes.

Published in the December edition of Imperial magazine