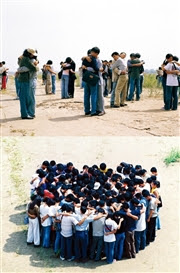 Young art gallery Vue Privée has announced it will exhibit new and old works by the Gao Brothers at their booth during Art Stage Singapore (Jan 12-15), having convinced the Chinese artists to participate in an art fair for the first time. The Beijing based brothers have been collaborating on installation, performance, sculpture, photography works and writing now for three decades. Their exhibition are often politially challenging and have been shut down in the past, while their studio has been raided.

As a fringe event to Art Stage, the dynamic duo will also be staging on Jan 14 their famous public art performance WORLD HUG DAY on the Event Plaza of MBS. The performance attempt to bring strangers closer together in a country where hugging is far from being best practice. It started in China in 2000, in the Shandong province, in various public locations all across the country, which later spread to other parts of the world including China, USA, UK, France, Germany, Japan and now Singapore.

The idea of “WHD” public performances is to gather a big group of people together, strangers to each other, and to choose one person at random to hug for a total of 15 minutes. The group then all join together to form a giant hugging cluster for an extra five minutes. The GaoBrothers and Vue Privée are calling upon the public of Singapore, to participate in the realization of the art work, hoping to bring together at least 1000 huggers... (All huggers will be given a 20% off their purchase of Art Stage tickets)

The Gao Brothers, Gao Zhen and Gao Qiang are two of Chinaʼs most vocal artists to date. Their works are created using multimedia poetics that draw upon diverse languages such as performance, photography, painting and sculpture.


Much of the Gao Brothers’ work has been colored by their family’s experiences during China’s Cultural Revolution (1966–76). In 1968 the artists’ father was arrested as a counter revolutionary, and days later he died while in custody. The Gao Brothers’ works of art seek to understand China’s complicated history and a government that has moved from Communism to a form of State Capitalism controlled by the Communist Party. At times, the works are politically charged, but in the end the brothers seek to forgive and understand. 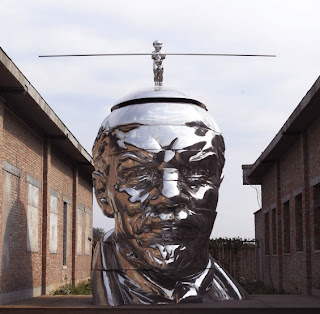