Curated by Wassan Al-Khudhairi, director of Mathaf, the exhibition showcases over 50 works installed throughout the entire museum, including 17 newly commissioned pieces, a selection of recent works on paper, canvas, and porcelain, and documentary videos on the making of Saraab and on previous works by Cai. 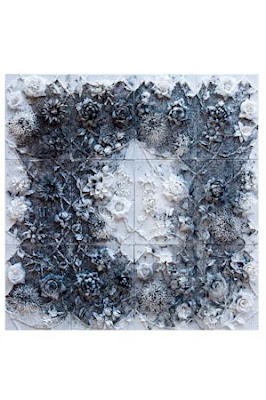 Since his youth, Cai had been curious about the traces of Islamic influence that can be seen to this day throughout his hometown, including the local streetscape, the grand Ashab Mosque and cemeteries with countless Arabic-inscribed tombstones. Located on the southeast coast of China, Quanzhou was a significant maritime port on the ancient Silk Road and a trade hub for silk, porcelain, tea leaves and spices. The city also hosted some of the earliest Muslim missionaries, now buried in the city‘s Holy Mausoleum.

Saraab offers Cai‘s perspective on the complex web of conceptual and material connections between China and the Arab world, of dynamics between historic localities marked as much by the passage of ideas and lived experience as by material trade.
Featuring the artist‘s characteristic use of symbols and stories about local history and transnational movements, Cai Guo-Qiang: Saraab explores the historic and contemporary iconography of the Arabian Gulf and its seafaring culture, as well as the Islamic history of Quanzhou.

Among the new works in Saraab is Homecoming, an installation of 60 rocks from Quanzhou, into which Cai has re-carved excerpts of Arabic inscriptions from the Koran and sayings of the Prophet Muhammad that are seen on the Muslim tombstones in his hometown. These boulders form a winding path from Mathaf‘s exterior courtyard to the inner atrium and visitors will be able to walk between the rocks, encountering the inscriptions one by one. According to Cai, the journey of the rocks from Quanzhou to Doha symbolizes a homecoming for Muslims in distant lands from the past millennium, offering solace and closure to their long awaited voyage to return home. 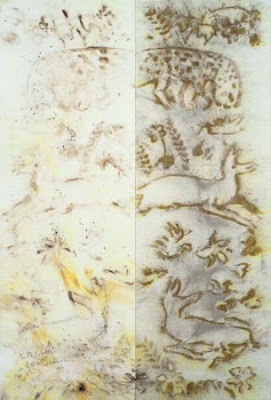 Cai has also produce a number of new gunpowder drawings for the exhibition with the assistance of local volunteers, creating works that trace the maritime route from ancient Arabia to Quanzhou and echo the botanical patterns seen in Islamic decorative art and textiles. These gunpowder drawings provide a symbolic avenue for rebirth or healing, a measured tension between destruction and creation. Documentary video of this creative process and Cai‘s preparatory sketches for the exhibition also will be shown. 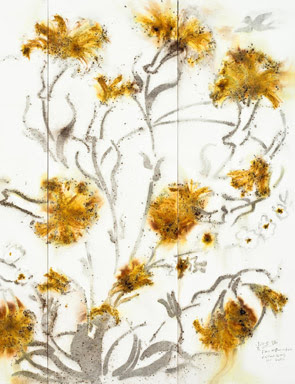 The works include Fragile, a unique 18-metre long by 3-metre wide porcelain mural comprised of more than 480 individual panels, marking the first time Cai is incorporating porcelain on a large scale into his work with gunpowder. 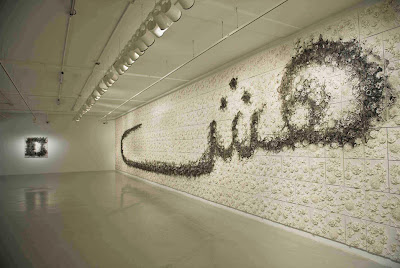 The exhibition also featured past works directly link to the newly commissioned pieces, including the documentation of Bringing to Venice What Marco Polo Forgot (1995), a performance and installation piece at the 46th Venice Biennale of a wooden fishing boat from Quanzhou carrying Chinese herbs and ginseng. A conceptual precursor to many of the works in Saraab, this work deals with the transportation of symbolic objects from China, linking the historic Silk Road to contemporary personal, even spiritual, pilgrimages.