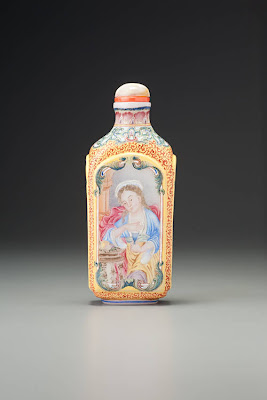 Bonhams Hong Kong set a new record for a Chinese snuff bottle at the auction of the celebrated Mary and George Bloch Collection: Part IV in a ‘Golden Gavel’ sale. A ‘famille-rose’ enamelled glass snuff bottle from the Imperial Qianlong palace workshops sold for $3.32 million. The tiny ‘European-subject’ snuff bottle measures only 8.07cm high and sold for over five time its pre-sale estimate to an Asian collector who bid on the telephone.


This was the largest snuff bottle of all recorded Imperial Palace enamels on glass, and is set apart by the distinctly European, elaborate trompe l’oeil frames around all four panels. The main panels depict elegant European ladies, while the subsidiary ones are of Chinese landscapes. This snuff bottle reflects considerable European characteristics; representative of the historical period it was made. The influence of the missionaries in the court arts of glassmaking and enamelling (particularly on metal and glass, which were arts introduced from the West) was significant during the first half of the eighteenth century. When this bottle was made, European and Chinese court artists worked side by side at the Imperial Palace workshops.

Following extraordinary results achieved at Bonhams Hong Kong in Parts I, II and III of the Bloch Collection, in which every single snuff bottle from the collection has so far been sold, with world records broken in 11 different categories, Part IV of the collection featured a total of 170 lots with an overall pre-sale estimate of HK$21,000,000 - 38,000,000. The total sold however was an astonishing outright record coming in at HK$59,637,000 (US$7.6 million)