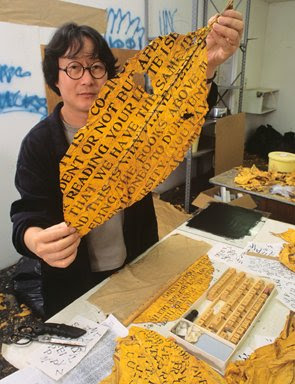 The Virginia Museum of Fine Arts has opened "Xu Bing: Tobacco Project" which will be running until Sep 10. The exhibition combines important pieces from the artist’s earlier projects at Duke University in North Carolina and the Shanghai Gallery of Art in China with new work inspired by visits to tobacco farms, warehouses, and cigarette factories in Virginia. Altogether the exhibition spans a dozen years of Xu Bing’s work and surveys one of his most ambitious undertakings

Xu Bing conducted his first Tobacco Project at Duke University where he was an artist in residence from 1999-2000. In 2004, he made a second Tobacco Project in Shanghai. Completing the trilogy, the newest Tobacco Project was inspired by his time spent in Virginia, which included a tour of the Philip Morris manufacturing center in Richmond, research at the Library of Virginia and the Valentine Richmond History Center, and a two-week residency in Richmond where he collaborated with former graduate students from Virginia Commonwealth University’s School of the Arts to make new work.

His new pieces include a 400-pound block of compressed tobacco embossed with the text “light as smoke,” a book of 50 historic tobacco slogans redesigned and printed on cigarette paper to form a bound volume of poetry, and wooden cigarette boxes stamped with the logo “Puff Choice.” 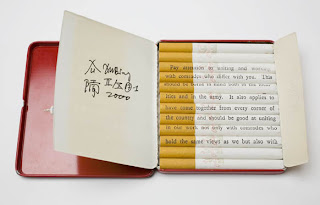 A prolific artist, Xu Bing has created a variety of works that explore traditional and experimental bookmaking and printmaking. Using tobacco as both a material and a subject in which to explore a wide range of issues, his work pertains to topics from the global trade to the exploitation of tobacco. Xu Bing’s interest in “tobacco culture” extends to the historical impact of China’s large-scale exportation of tobacco products from the United States that began in the late 19th century. By exploiting the complex connections between people and tobacco, his project ultimately alludes to fundamental issues of human culture and of tobacco as a medium of social exchange.
Asian Art Chinese art