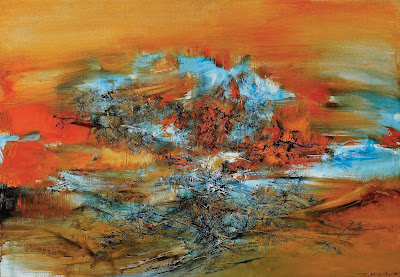 Female Artists of 20th Century China
Two mainstream movements dominated the early development of 20th Century Chinese art. The first was the Modernist School, spearheaded by Lin Fengmian who advocated integration of Western and Eastern influences. Another was the Realism School in which Xu Beihong was the leading figure. By comparison, a number of female artists active during this period transcended these differences. When faced with a choice between Oriental tradition and Western modern art, they maintained an open attitude and willingly imbibed both. Although famous female artists such as Fan Tchunpi, Cai Weilian and Pan Yuliang were steeped in a strong foundation of Realism techniques, their artistic horizons were broadened by a continuous input of new ideas and elements into their art. 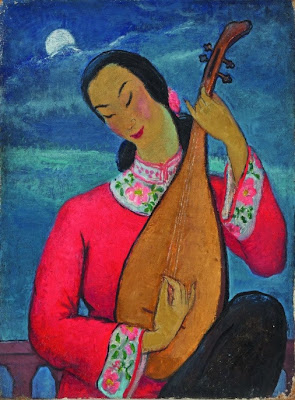 Three Pan Yuliang masterpieces will be offered this season. Moonlight Sonata was painted during Pan’s second trip to Paris. Here, a lady in traditional Chinese costume is seen playing the pipa, a plucked string instrument, held in her embrace under full moonlight. Epitomising classical
Oriental beauty, the maiden’s demure elegance is expressed through her hands, facial features and feminine curves, all rendered delicately through the artist’s brush. In contrast to her demeanor is her carefree pose and flamboyant red clothing, which seem to suggest she has a mind of her own. The painting calls to mind the artist’s early romantic encounter with her other half Pan Zanhua, whom
she eventually married. Moonlight Sonata is undoubtedly a self-portrait by the artist. 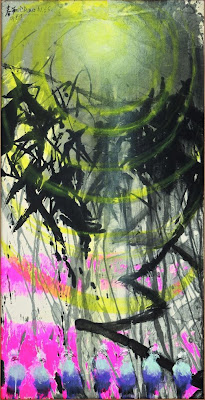 
In Praise of Light is a classic work by Chao Chung-Hsiang, completed at the zenith of his career during the 1980s. It also featured on the cover of an art catalogue entitled Chao Chung-hsiang, published by Hong Kong’s Alisan Fine Arts Gallery in 1971. Fusing artistic influences from the East and West, the painting is executed on traditional rice paper. It is, however, marked by a riot of colours from the luminescent acrylic paints administered in broad and bold brushwork.

Zao Wou-ki’s masterpiece Vaque is highly representative of the “oracle-bones” phase of his career. It was inspired by a bull-fight he watched in Spain. Eschewing realism to embrace an approach of
personalised symbolism, he draws heavily from a mix of Chinese calligraphy, oracle inscriptions and hieroglyphics, to produce dynamic lines and symbols in jet-black and dark blue hues. Dominating the upper half of the painting is a space contained by an indigo arc, which stands for a coliseum in which a female matador on horseback races around waving a cape to tame a raging bull. The dark blue outer fringe represents a cheering crowd of spectators.

Pursuing a theatrical style of composition, Yang Yidong used the dramatic contrast of light and darkness to emphasise a newly-wed couple exchanging toasts. The bright candlelight on the table casts a glow on the bride’s face, her head slightly tilted to avoid eye contact with her groom and with a smile expressing a mixture of joy and shyness. Visually, the arcs of their raised arms run parallel to the red drapery above them. A cloth bouquet, through which the drapery is tied together, is also aligned with the palms of the couple, suggesting a life of togetherness for them ahead.
Auctions Chinese art Sotheby’s

Peggy Guggenheim was no ordinary art collector. In her lifetime, she acquired a treasure trove of Cubist and Surrealist artworks at bargain price right before the onset of the Second World War; she ran art galleries in London and New York championing then-little known artists such as Jackson Pollock and Robert Motherwell; and she also played a significant role in positioning Venice as a contemporary art city after she moved there permanently in 1948.
After her death in 1978, her Venetian home, the 18th-century Palazzo Venier dei Leoni, was transformed into a permanent exhibition space housing the Peggy Guggenheim Collection. It is now the second most visited museum in the city after the Dodge’s Palace with over 427,000 visitors a year.
But while her collection is primarily renowned for its Cubist, Surrealist and Abstract Expressionist masterpieces, the new exhibition “Peggy Guggenheim: The Last Dogaressa” – running until January 27, 2020 - is aiming to showcase how wide her collecting e…

Blink and you would have missed it, but as art lovers rushed toward the entrance of Art Basel’s Unlimited section, a small group of students and young artists were staging a brief silent performance. Slowly moving around each other gesturing at key words (heatwave, sea level, and drought) on their t-shirts, they aimed to raise climate awareness, engaging visitors positively.
Meanwhile inside the mammoth art fair, galleries had brought relatively few artworks with explicit environmental messaging, but there were some, such as a series of Olafur Eliasson’s pictures taken inside glacier holes, Doug Aitken’s aluminium lightbox spelling the word THINK with chromogenic transparency in acrylic a sunset over a bare landscape, and Jack Pierson’s ominous warning ‘There is still time’ written on a wall.
The artistic value of such efforts is being recognized (the Lithuanian Pavilion’s climate change-themed opera “Sun & Sea (Marina)” won the Golden Lion award at the Venice Biennale), but orga…