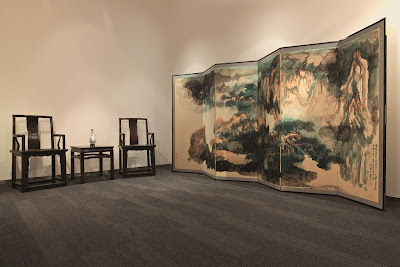 Sotheby's HK will present an exhibition of My Life with Father – The Chang Sing Shen Collection of Paintings by Zhang Daqian exhibition Oct 1-5 during its Autumn Sale. The exhibition will feature around 30 precious works by the Chinese master, all of which were gifts for the artist’s fourth daughter – the present owner - Chang Sing Shen. Apart from the paintings, an array of family letters, postcards andphotographs will also be on view – all reflecting Zhang’s affection for his daughter and the intimacy between them.


Chang Sing Shen emigrated to South America with Zhang and the family in the early 1950s. Leading a relatively carefree and peaceful life, Zhang spent considerable time with Chang as he painted and travelled around the world. The artist occasionally dedicated paintings to Chang, which reflected his great affection for his daughter. Chang remained with her father for more than a decade until she got married in the late 1960s and moved to the United States where she currently resides.

The paintings featured in this exhibition were executed from the 1950s to 1970s, and are predominantly abstract works, using splashed ink and colour. Other exhibits include a gigantic screen, given to Chang as a wedding gift, letters between the artist and Chang, and family dinner menus, among other items. These paintings and memorabilia have never previously been on public view, and provide a rare glimpse of Zhang as a father as well as an accomplished artist. 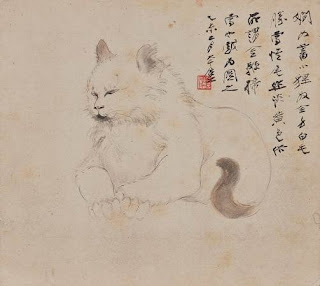 "One of the highlights is Kitten, an ink and light colour on cardboard, executed in 1955. “While living in Mogi das Cruzes as a very young girl, I found a beautiful white kitten with a golden tail and kept her. Sadly, the kitten became very sick within a year and died. I was heartbroken and cried for a long time afterwards. I told Father that I didn't believe in God anymore because I had prayed for my kitten to get better, but my prayers were unanswered. I remember Father gently smiled and comforted me by holding my hand. A few days later, Father painted a painting of my kitten for me.”
Auctions Chinese art Sotheby’s