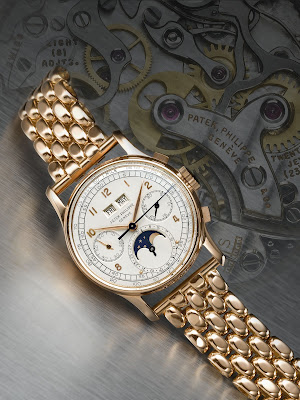 Sotheby’s Hong Kong Important Watches Autumn Sale 2011 will take place on October 6. With over 470 lots dating from the 1800’s to the present day, the sale is estimated to achieve a total of $9-13 million – the largest of the category in the history of Sotheby’s Hong Kong.

Highlighting the sale is a small group of excellent vintage complicated wristwatches by Patek Philippe consigned by four discerning Asian private collectors, including a very rare Pink Gold Perpetual Calendar Chronograph Wristwatch with Registers, Tachometer, Moon-Phases and Gay
Frères Bracelet 1951 (Est. US$410,000 - 610,000. The iconic Ref. 1518 was the first wristwatch ever serially produced by any watch manufacturer that combines the complication of a perpetual calendar, a chronograph and the phases of the moon. This design was an inspiration to later references,
including the Ref. 2499, 3970, 5970 and now the 5170. Produced between 1941 and 1954, a total of 281 pieces of this reference were made and the present example is one of approximately 60 pieces made in pink gold, making it highly collectible and extremely rare. Adding to its exceptional rarity, this watch is one of only four known to the market bearing a “Mile” tachometer on the dial. Kept in a private collection for over 30 years, this timepiece is wellpreserved and further enhanced with a finely crafted 18k pink gold bracelet by renowned bracelet maker Gay Frères.

Another highly notable vintage watch preserved in impeccable condition is a Patek Philippe Ref. 1463, an extremely fine and rare 18k Pink Gold Chronograph Wristwatch with Register and Tachometer 1970 Mvt 869244 Case 2615216. Produced between 1940 and the late 1960s, the Ref. 1463 was manufactured in a quantity of less than 750 pieces, and was Patek Philippe's first water-resistant chronograph wristwatch. The watchmaker’s production of chronograph wristwatches ceased with the discontinuation of the Ref. 1463 and did not resume until the debut of Ref. 5070 in 1998. The case bears the maker’s mark of Taubert & Fils, one of the finest water-resistant case makers. Given to the present owner by his father, an ex-retailer of  Patek Philippe, as a birthday gift when he turned 18, this treasured timepiece was never sold at retail and has been preserved in pristine condition with the original certificate and presentation box.

The sale will also include 50 pocket watches spanning two centuries.