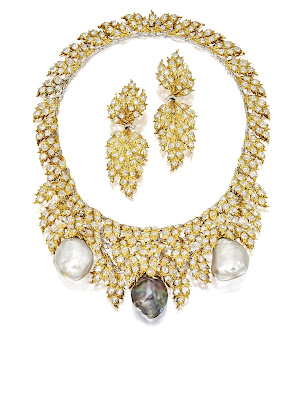 Sotheby’s HK will hold the Anita Mui – Jewels and Watches From The Estate auction on Oc 5, offering exclusively 43 lots of jewels and watches as well as memorabilia items from the estate of Anita Mui (1963 – 2003) - the legendary canto-pop diva and award-winning actress from Hong Kong.
The impressive array of properties is redolent of Mui’s flamboyant taste and style.

One of the most intriguing objects of the auction is a pearl and diamond necklace and a matching pair of earrings by Gianmaria Buccellati, which Mui acquired for her future wedding but later on wore in her phenomenal final stage performance.

Widely acclaimed as the “Ever-Changing Pop Diva”, Hong Kong singer-actress Anita Mui Yim-fong (10 October 1963 – 30 December 2003) is an iconic figure in the Canto-pop world. Dubbed the “Madonna of Asia” by the Western media, Mui was famed for her daring, ever-changing style and high-powered performances, which revolutionised Canto-pop scene in the 1980s. Her stage presence earned her a fan base that reached far beyond Hong Kong into many parts of Asia including Taiwan, Mainland China, Singapore, Malaysia and the overseas market. In September 2003, Mui was diagnosed with cervical cancer, and she died three months later.

The will be auction previews 16– 17 Sep in Shanghai at The Portman Ritz-Carlton Shanghai;
19–20 Sep in Beijing at The Ritz-Carlton Beijing, Financial Street, and 24–25 Sep in Taipei at Fubon International Convention Centre.
Auctions Luxury Sotheby’s