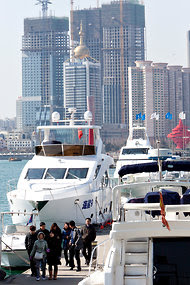 Yachting in China is still in its infancy. While several marinas have been developed along the country’s eastern coast in the past five years, Chinese coastal waters are still strictly regulated, and import duties of 43 percent have dampened the development of a vibrant yachting culture. In 2009, the Chinese yachting market was worth $440 million, according to a recent report by China Research and Intelligence, compared with a global yacht market estimated at around $3.4 billion. Yet international yacht brands have started to make some headway.
Azimut Yachts, the top Italian brand, sold 26 yachts to mainland Chinese buyers in the past 12 months, according to Sebastiano Fanizza, the company’s manager for the Asia-Pacific region. Most were 50-to-80-foot vessels, or 15-to-24 meters, but the company also sold its flagship 120SL during the 2011 Hainan Rendez-Vous show in April, the biggest motor yacht ever delivered in China.

“Maybe it is still a small market compared to the global market, but it has the greatest potential,” Mr. Fanizza said.

China, he said, “is the place where you have to be now, working for the future.”

“Encouraging Chinese to own yachts is the biggest challenge this industry faces,” said Tork Buckley, a founder of Big Blue Consulting, which consults shipyards and clients on new construction build and refit specifications. “God knows, they have the money.”

For now, the first thing China’s new rich think about buying “is a name-brand watch, a Ferrari, an apartment,” said Mr. Buckley, who is also the Asia editor of the magazine The Superyacht Report. “They’re not thinking of yachts, yet.”

“Hainan goes a long way toward helping that because it puts Chopard next to Lürssen,” he added, referring to the Rendez-Vous event. “They know Chopard, but don’t know Lürssen, and that builds Lürssen’s brand.”

Along with international yacht-manufacturer brands, the Hainan event also attracted home-grown brands, including Kingship and Heysea Yachts, which are just starting to flex their muscles, especially in the super-yacht category.

Kingship, based in Hong Kong, has already built five yachts in its MinZhong shipyard in the Pearl River Delta. It is now building Green Voyager, a 144-foot motor yacht that the builder hopes will need 20 percent less power than a conventional yacht of the same size, thanks to a diesel-electric propulsion system developed by Siemens.

When Roger Liang established Kingship as the first Chinese shipyard specializing in steel and aluminum superyachts in 2004, he faced queries about the reliability and competency of the new brand.

“But after the delivery of our first yachts, which have obtained Lloyds and M.C.A. classification, I think we have gained some trust and reputation in a superyachts industry which has long been dominated by the Western builders,” Mr. Liang said. M.C.A. stands for the Maritime & Coastguard Agency of Britain.
Furthermore, the construction of Green Voyager is helping demonstrate that, as in other economic sectors, “Chinese-made” does not mean “copy-cat” or “low-tech,” he said.

While the company has not yet sold a yacht to a mainland Chinese buyer, Mr. Liang is hoping to crack that market with two small projects, a 28-foot model and one at 38 feet, that his company is developing. Kingship should be ready to present those open boats in a few months, he said, noting that while there is interest in bigger yachts in China on the corporate side, yachting growth in China is more likely to start with smaller boats, “just as it started everywhere else in the world.”

Read the rest of this IHT story