Hirst, Murakami and Yayoi Kusama at Sotheby’s Beyond Limits

Sotheby’s London is presenting once again Beyond Limits, its annual selling exhibition of monumental sculpture, on the historic grounds of the ancestral home of the Dukes of Devonshire at Chatsworth from Sep 16-Oct 30. Visitors will have the chance to view Damien Hirst’s new piece Legend as well as Myth, ahead of a major retrospective of his work at Tate Modern next year. 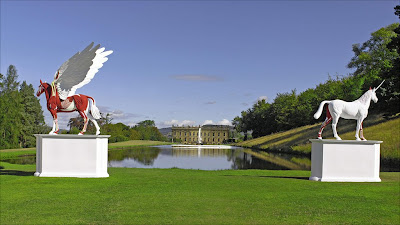 Hirst has written that he believes that science and religion are the guiding lights for the human condition and they find eloquent expression in the majestic equine form of Legend. This monumental winged horse stands atop its plinth as an icon of Hirst’s new modern mythologizing art. Pegasus, embodying the freedom and nobility of nature, was the legendary beast that Bellerephon rode to defeat the Chimera. However Hirst’s Legend has come under the scrutiny of the vivisectionist. One flank has been surgically flayed, exposing its muscles and bare bones, showing the secrets of this mythological animal.

An elegant counterpart is another sculpture by Hirst, Myth (2010), which depicts the fabled unicorn. Its shimmering white flank is also flayed to reveal the visceral musculature beneath.

Takashi Murakami’s unique Flower Matango (A) from 2001 is a clear example of how Japan's foremost contemporary artist merges contemporary culture with traditional Japanese training. At over 13 feet high, with its twisted vines and brightly coloured flowers with googly eyes emerging from a multi-coloured ball, the large-scale fiberglass, resin and iron sculpture is appropriately sited in Flora’s Temple. The work, which took a year-and-a-half to complete, is an amalgam of high and low art that uses the artist’s iconic motif of eyes to create an effect that is at the same time joyful and unnerving to behold. 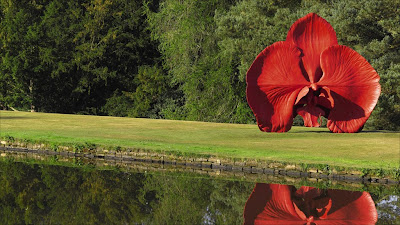 Marc Quinn’s monumental Burning Desire is based upon a naturalistic rendering of a Phalaenopsis orchid. The fine red petals defy the properties of the bronze medium in which they are cast, to appear almost weightless and ethereal. The work belongs to a series of sculptures and paintings through which Quinn explores the concept of ideal beauty achieved through genetic modification. Familiar though exotic, Burning Desire has been rendered uncanny by its immense scale, in which the flower takes on an almost ominous presence. The work’s title also hints at the sculpture’s latent sexual connotations; the heart of the flower is its reproductive organ. 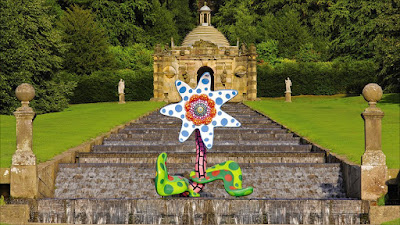 Regarded by some as the most important living female artist, Yayoi Kusama is represented by the new work Flowers That Bloom Tomorrow. Kusama has revisited one of her most consistent figurative preoccupations, with a towering 9-feet-tall fiberglass flower. The artist’s latest works are amongst her most joyous creations and here the sculpture’s psychedelic colours provide a vibrant contrast with the natural landcape. Kusama’s work will feature in a major retrospective at Tate Modern next year. 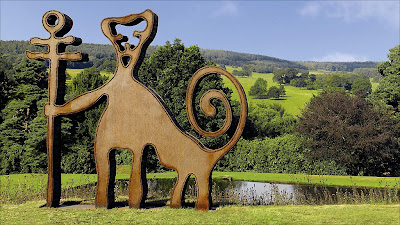 Lebanese artist, architect and urban-painter Nadim Karam has established himself through monumental sculpture with his trademark use of steel. Desert Sand is a striking example of one of Karam’s recurring signature figures; an animal shape in silhouette holding a totemic-looking pole. The work rises as a monolith, its rugged exterior of rusted steel poetically suggesting an aged presence that has undergone erosion and the slow passage of time. 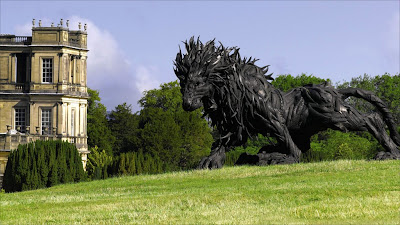