on August 08, 2011
Last October, French jeweler Van Cleef & Arpels launched during the Biennale des Antiquaires Les Voyages Extraordinaires de Jules Verne, a new collection inspired by the celebrated science-fiction writer. Not all the pieces were ready though with many still under production. Some pieces that have just come out of production, plus some existing pieces that were showcased at the biannale are now on show in Singapore until August 15, before moving to Kuala Lumpur from August 19th.
The company selected four of Jules Verne’s books – Five Weeks in a Balloon, Journey to the Centre of the Earth, From the Earth to the Moon and Twenty Thousand Leagues under the Sea, and these fantastic adventures are the canvas for Van Cleef to show its artistics craftsmanship at its best.
There are some many wonderful examples it’s hard to choose.

Here are my picks from "Five weeks in a Balloon"

From the Twenty Thousand Leagues under the Sea Collection, I’ve zoomed in on the Olindias brooch made of rose cut diamonds, which looks like a mix between Medusa and a fairy. 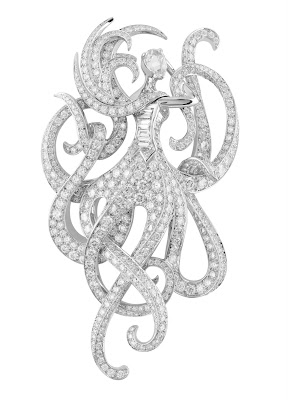