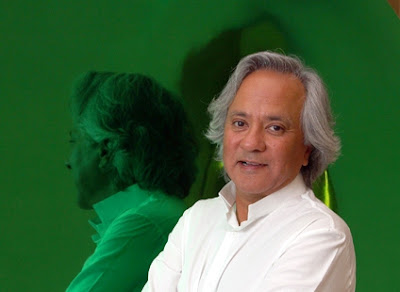 
Kapoor was born in Mumbai in 1954 and spent his childhood in India. Educated in London, Kapoor has been producing highly-acclaimed sculptural creations for more than 40 years. Often, his works are on a grand scale, featuring simple, curved forms, usually monochromatic and brightly colored. The awesome size of his pieces challenge perceptions through their scale and evoke mystery and emotion through reflective surfaces, dark crevices or distortions. In his early career, Kapoor was fascinated by pigment and would cover his works and the surrounding floor in colors, as featured in his first high profile show at the Hayward Gallery in London in 1978.

Kapoor’s later works were made of solid, quarried stone, many with a carved-out aperture, alluding to dualities such as earth-sky, matter-spirit and body-mind. Recent works, like Sky Mirror (2001) and Cloud Gate (2004), use mirrored surfaces to reflect or distort the viewer and the surroundings. His newest piece Leviathan (2011), first exhibited in the Grand Palais in Paris, is simple yet monumental. Its complex engineering took two years and a team of 150 people from across Europe to create. Kapoor says that one of the principle jobs of art and the artist is to make things that in spite of all rationality remain mysterious.
Last year, the Praemium Imperiale was awarded to Enrico Castellani (painting), Rebecca Horn (sculpture), Toyo Ito (architecture), Maurizio Pollini (music), and Sophia Loren (theatre/film).

The Praemium Imperiale was created in 1988 to commemorate the 100th anniversary of the Japan Art Association and to honor the late Prince Takamatsu, who served as the association’s honorary patron for 58 years.