For his first solo exhibition, Singaporean graffiti artist TraseOne also known by his tag TR853-1 continues his jeux de mots and use of sewn red strings on his witty canvases. 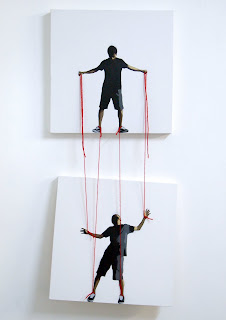 Beginning as a self-taught graffiti artist in 1999, TraseOne (TR853-1) is highly regarded as one of the boundary-pushing pioneers of the local street art movement. In 2005, he was granted the inaugural Goh Chok Tong Youth Promise Award to expand his knowledge in art, eventually graduating with a Bachelor in Fine Arts (Honours) Degree in 2007 from the LASALLE-SIA College of the Arts. What started as an ego-driven adolescent hobby of scrawling his name on the streets has evolved into a more intellectual dialogue with his audience, who strive to decode the subliminal messages cleverly embedded in his work.

In this latest series, the artist uses an interventionist approach to suggest to the viewer that life should not be constrained by boundaries and restricted space. 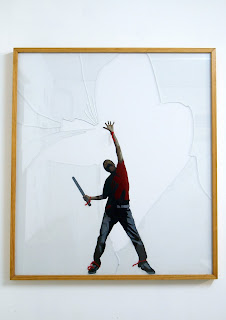 FreeThem raises the need to break away from the abnormality of systems by stepping out of comfort zones. Here the artist depicts himself as a puppet governed by others and not himself. But the quest for freedom sees him breaking away from whatever controls him through the red strings. He breaks free, negotiates and intervenes with his surroundings to escape from a dull, white environment.

Going beyond the surface of the painting with cut and pulled canvases, and sewn red string, the works tease and tickle your imagination as to what a painting should appear like. The show will open on Thursday.