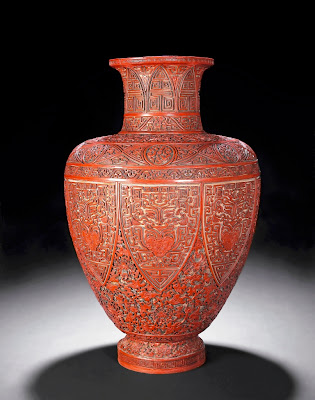 Bonhams & Butterfields will offer a massive rare carved red, lacquer vase, Qianlong, discovered in an East Coast private collection on Jun 20.
Carved with classic taotie masks, enclosed in stiff lappet bands on a ground of flower heads and volutes, it is a nice example of the Qing Imperial court interest, in combining archaic bronze forms with recently introduced Western Baroque elements in an object of imposing scale. 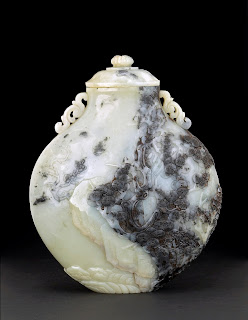 There will be additional snuff bottles from the collection of Linda Riddell Hoffman, whose one-owner white glove sale in March at Bonhams New York was met with strong interest. The group of jade, semiprecious stone and ivory bottles (estimates vary) will be complemented by part one of snuff bottles from the Estate of Norman Stiller, a San Francisco immigration lawyer known for his connoisseurship and passion for this collecting field. Snuff bottles and glass from the collection of Dr. Alan Feen, whose star lots sold brilliantly at Bonhams Hong Kong last November, will also be offered in this sale, along with his library of books on Peking glass and Asian art.