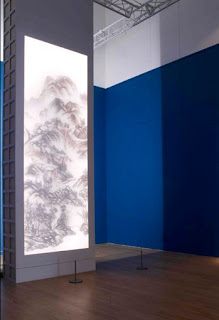 Internationally renowned Chinese artist Xu Bing has created a new art installation specially commissioned for the British Museum. Background Story 7 is part of his ongoing series of museum installations and consists of a dramatic large-scale shadow and light box giving the illusion of a traditional Chinese landscape. The exhibition is on display through July 10th.

This new work is made in direct response to a Chinese mountain landscape hanging scroll by Wang Shimin dating to 1654 which is a part of the British Museum’s collection. The contemporary and antique works are exhibited together in Room 3 following the time-honoured Chinese practice of entering into “dialogue” with a past model by creating a new artistic work. 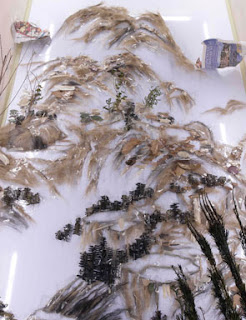 Nearly 5 metres tall, Xu Bing’s artwork is made using materials such as hemp fibres, dry plants, corn husks, crumpled paper and debris sourced from sites across London, placed on a backlit screen. Seen from the front, the work looks like the brush strokes of a Chinese painting, but step behind and the illusion is shattered. The installation was created on site by Xu Bing and will only exist for the duration of the display.

Xu Bing has been creating installations for Background Story since 2004 at the invitation of various museums in China and abroad, the last being shown at the Museum of Arts and Design in New York in 2010. The six previous works in the series have been in a horizontal format as responses to traditional handscrolls, but at the British Museum he works for the first time in a vertical format to correspond to the traditional Chinese hanging scroll. This change of format presents new challenges and significantly alters the impact of the work.