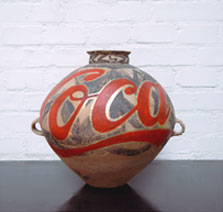 There is no stopping of keeping Ai Weiwei's name out of the art world news. Another exhibition, Ai Weiwei: Dropping the Urn (Ceramic Works, 5000 BCE – 2010 CE) has just opened at the Knoxville Museum of Art, his first solo exhibition outside of New York City in the United States.

Organized by Arcadia University Art Gallery, the new retrospective features a selection of ceramic works and photographs ranging from 1993 to the present. In these works, Ai Weiwei transforms ancient ceramic objects, including 7000-year old Neolithic urns and Han dynasty vessels, by painting them with a “Coca-Cola” logo, dipping them into vats of industrial paint, smashing them on the ground, or grinding them into powder.

KMA Executive Director David Butler emphasizes the importance and timeliness of having this exhibition in Knoxville given the world-wide publicity about the artist’s contentious relationship with Chinese authorities: “Ai Weiwei is an artist of tremendous international stature whose work speaks to universal values and human rights and demonstrates the power of art to move us both intellectually and politically.”
The largest piece in the exhibition is another installation of his tiny sunflower seeds, a common street snack in China. Each seed, produced to scale, was painstakingly hand-crafted from porcelain.