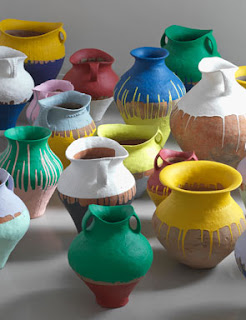 Lisson Gallery has just opened a major survey show of recent works by Ai Weiwei to be held across both Bell Street spaces, London. The broad selection of key works from the past six years was agreed with the artist at the beginning of 2011, before he was arrested.

Highlights of the 13 works in the exhibition include colored Vases (2010, 2009), groupings of Han Dynasty pots (from 200DC-220AD) covered in industrial paint. An expert in ancient Chinese ceramics, Ai’s continued desecration of individual vases can be seen as political comment on the organized destruction of cultural and historical values that took place during the Cultural Revolution, when everything old was replaced by the new.
With Surveillance Camera (2010), the artist memorialises the clunky apparatus of CCTV surveillance by replicating it in marble, medium of monuments and gravestones. Here Ai evokes themes of paranoia and voyeurism and underscores his own particular response to constant surveillance: making his life totally transparent through endless Twitter documentation. If everything is open there’s nothing to spy on. 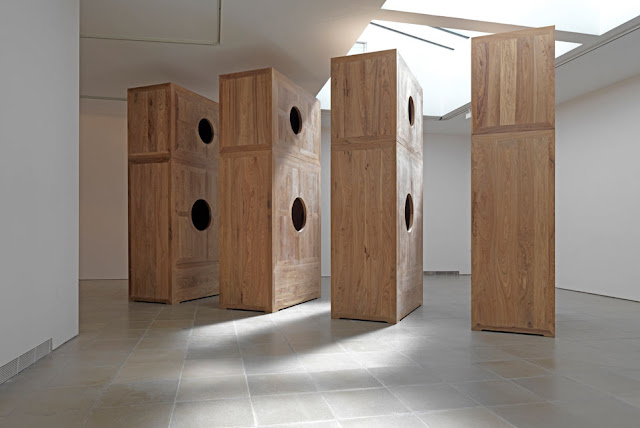 Running concurrently at Somerset House until June is Ai Weiwei’s first outdoor public sculpture installation in London: Circle of Animals/Zodiac Heads comprises of 12 bronze animal heads, re-creations of the traditional Chinese zodiac sculptures, which once adorned the fountain of Yuanming Yuan, an imperial retreat in Beijing which was famously looted by foreign military.


Ai Weiwei was detained by authorities in Beijing while trying to board a flight to Hong Kong on 3 April and has not been seen or heard from since.