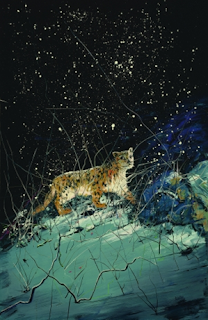 Christie's will auction The Leopard by Zeng Fanzhi' at its HK evening sale on May 28, with the proceeds going to The Nature Conservancy. The painting carries an estimate of $770,000 to $1.02 million, though it's easy to forecast it will fetch much more. This is a monumental canvas standing nearly three meters tall. Here, Zeng presents a solitary and ill lit leopard, moving cautiously through a dark forest. The foreground of the composition is dense with his characteristically expressive brushwork, depicting a thicket of dry, lifeless branches. The depth of the landscape is delineated by mysterious flairs of white and the powdery blue snow embankment. The leopard is shown passing over this ridge, against an infinite black sky, peppered with flakes of snow, behind him. Some areas of the composition seem deliberately blurred, as an audience‟s vision would be in trying to gaze through a snowstorm. But the handling of the leopard is particularly evocative, highlighting the soft subtle beauty of its coat, varying from white to ochre to soft amber, speckled with its black spots and the snow gathering on its back. Its gaze is penetrating, almost human. A really beautiful painting..