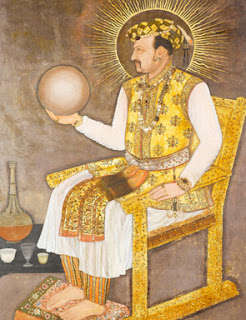 Bohnams will offer Apr 5 the largest known Mughal painting with an estimated price tag of £1 million. The portrait which will lead a sale of works of Indian and Islamic art is a unique painting of the Mughal Emperor Jahangir who ruled India 1605-1627 and is attributed to the Mughal artist Abul Hasan, Nadir al-Zaman or “Wonder of the Age”.  It is done in the style of a European portrait of the early 17th century and the Emperor is shown seated on a gold decorated throne holding a globe, wearing elaborate robes and jewellery.  Alice Bailey, Head of Indian and Islamic Art at Bonhams commented “this is one of the rarest and most desirable 17th century paintings ever to come to auction. There is no other work of its kind known and its importance cannot be underestimated."
Auctions Bonhams Indian art