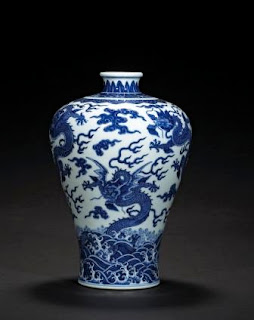 A blue and white porcelain Dragon jar sold for $7.656 million in the Fine Asian Works of Art sale oat Bonhams & Butterfields in San Francisco. The 360-lot sale brought more than $19 million with the vast majority of the lots fetching multiples of their estimates. There was much anticipation and deliberation over the Dragon jar. Following careful pre-sale research and consultation, the firm described the jar conservatively as Qianlong Mark, Late Qing/Republic Period and gave it a pre-sale estimate of just $10,000-15,000. Ultimately, two key bidders backed their own judgment and the Dragon jar sold for a remarkable $7.66 million. Lucky seller! Dessa Goddard, Vice President and Director, Asian Works of Art, commented, “The jar proved to be a puzzle for several clients with whom I spoke who all declared it to be unique. Without a consensus of opinion we felt obliged to be cautious with our attribution.The sale provided a fantastic slice of auction drama that our clients and staff will remember for many years to come.”
The blue and white porcelain jar measures an impressive 14 inches high and is decorated with bands of plantain leaves, waves, and a cloud-collar at the waisted neck and broad shoulders. The sides are densely painted with six meticulously rendered five-clawed dragons portrayed emerging from crashing waves and flying amid stylized clouds and flames.