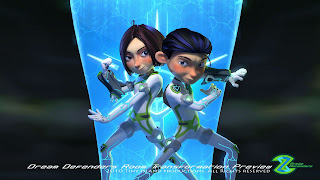 “Made in Singapore” is becoming a more common tagline for computer-generated animation. While this industry in Singapore is less than 10 years old and still very much in its infancy, it has turned an important corner in the past couple years, executives and analysts say. Christopher Chia, who until two weeks ago was chief executive of the Media Development Authority in Singapore, said he saw local production moving up the value chain. “In the early years, our industry could be characterized as a fee-for-service industry,” said Mr. Chia, who is now a senior adviser to the Ministry of Information, Communications and the Arts. “Somebody out there would commission a part of a show and companies here would execute.” “But increasingly, our companies are either co-owning or owning the intellectual properties,” he said. “At the same time, they’re working with the bigger boys around the world to co-produce or co-market the content.” That is the case with Dream Defenders, developed and produced by Tiny Island Productions of Singapore and introduced in October at the Mipcom trade show in Cannes. When completed, the 26-episode show will be the first three-dimensional series from Singapore. Another local studio, Sparky Animation, signed a contract with the Jim Henson Co., creator of the Muppets, to co-produce a second season of the award-winning children’s series Dinosaur Train, which is animated and computer-generated. It also participated in the first series. Meanwhile, August Media Holdings, which is based in Singapore, recently signed a $60 million deal with the U.S. media company Classic Media to develop and jointly produce 10 new shows for television. They will be based on children’s classics from Classic Media’s catalog, which includes “George of the Jungle” and “Mister Magoo.”
August Media was founded in March by the industry veteran Jyotirmoy Saha, who used to be co-head of Sparky Animations. Three months ago, the company acquired the Scottish children’s content producer Red Kite Animations, founded in 1997 by Ken Anderson. Red Kite is behind The Secret Life of Benjamin Bear, Dennis and Gnasher, 64 Zoo Lane, and The Imp. “The real business is in developing and owning intellectual property, with media products that can move across different platforms,” Mr. Saha said. “As a company we’re trying to build this business in a complete 360-degree manner,” he added. “We acquired Red Kite because we wanted to move quickly and that was a good way to jump-start our kids’ content business.” Mr. Saha said the company was in negotiations to acquire a couple of distribution companies in Europe that would help August Media Holdings “control the monetization of our own content and that of our partners.”
August Media will be one of the first tenants of Mediapolis, a 19-hectare, or 47-acre, high-technology media park, when the first building opens there in December. The park will take as long as 10 years to be fully developed but is envisaged as a self-contained media ecosystem, with soundstages, digital production and broadcast facilities, and media schools. Read the whole story in the IHT.