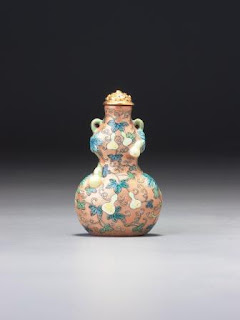 Bonhams Hong Kong achieves a white glove auction with the Part II of the world’s finest collection of important Chinese snuff bottles, the Mary and George Bloch Collection. The sale raised HK$54.8 million, more than double the presale estimates with every one of the 155 rare bottles sold. A good number of the lots sold for twice to four times their estimate.
A new world record for a porcelain snuff bottle was reached when Lot 121 sold for a staggering HK$8.38 million, four times its pre-sale estimate.Commissioned by the Qianlong emperor and enamelled in the palace workshops of the Imperial Palace between 1736 and 1760, this snuff bottle, decorated with ‘double-gourds’, symbolic of long life, is identical to another rare example still preserved in the Forbidden City Palace Museum. 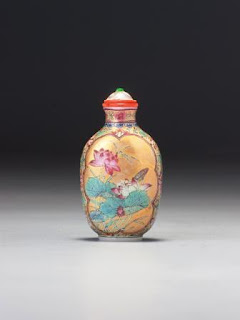 The highest price of the sale, and a new world record for a glass snuff bottle was achieved by Lot 152, a 'famille-rose' enamelled gold-ground glass 'lotus' snuff bottle, which sold for HK$9.05 million, almost four times its presale estimate . The snuff bottle was commissioned by the Qianlong emperor (1736-95), and decorated with lotus flowers against a rich golden ground, and incised on the base with the Imperial mark.

The same real-estate Chinese tycoon who broke the world record when he paid HK$9.28 million for a snuff bottle on his first day of collecting them at the Part I of the sale held in May was again a big buyer his time around. Part III of the Snuff Bottles from the Mary and George Bloch Collection will take centre stage at the Bonhams Spring 2011 Auctions to be held in May 2011